Can One Get Medical Marijuana for Anxiety Disorders? 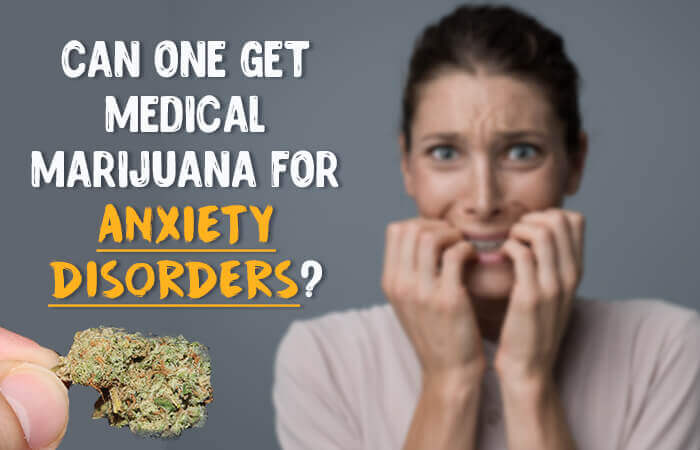 Whether you have only just been diagnosed, or have battled with it for years, anxiety can be a very hard condition to deal with. No matter how severe your case, an anxiety disorder makes typically simple activities feel like insurmountable tasks.

If you suffer from anxiety, then you are not alone. Anxiety is one of the most common mental illnesses in the United States. In this article, we will take a closer look at anxiety disorders, how cannabis can help treat this condition, and whether you could qualify for medical marijuana as a treatment option.

What is an anxiety disorder?

Anxiety disorders are defined by feelings of excessive apprehension, worry, and even fear. As one of the most common mental illnesses in the US, the Anxiety and Depression Society of America (ADAA) has reported that anxiety disorders affect 40 million adults in America – that’s about 18% of the entire population. Shockingly, only about a third of people who suffer from anxiety are thought to seek treatment.

Anxiety disorders are typically chronic in nature, last for at least six months, and tend to get worse without treatment. Feeling anxious in stressful situations is perfectly normal. However, for some people, anxiety occurs so often and with so much force that it begins to take over their lives. Because it can appear in any shape or form, it can be difficult to determine when anxiety turns into a disorder.

There is an array of mental illnesses that fall under the spectrum of an anxiety disorder. These include the following:

Many anxiety medications have an extreme list of side effects, including feelings of drowsiness, impaired judgement, inebriation, nausea, memory loss, clumsiness, and slurred speech. More severe side effects include infertility, seizures, suicidal thoughts, and tumors. Some patients have a hard time finding the right treatment for their anxiety since we all have unique brain chemistry and react differently to medications.

Thankfully, marijuana has shown some promising results when it comes to treating anxiety disorders, and it also doesn’t seem to have the same severity of side effects associated with prescription medication. As we learn more about medical marijuana, we continue to discover new ways that it can serve as a natural alternative to pharmaceutical drugs.

Preliminary studies on medical marijuana and anxiety have shown that cannabis has similar components to manufactured pharmaceuticals for anxiety symptoms. One of the most consequential findings is that marijuana can have a positive effect on the gamma-aminobutyric acid (GABA) levels in the brain. GABA has been thought to have a natural calming effect and is also believed to reduce feelings of fear and anxiety by decreasing neuronal excitability.

Various medical studies and patient surveys have reported that people from a range of diverse backgrounds experienced reduced levels of anxiety when using marijuana. In fact, a study published in the Journal of Basic and Clinical Physiology and Pharmacology last year found that the most common reason for cannabis use was rooted in its ability to reduce feelings of tension, stress, and anxiety.

What the law states

Although 29 states have legalized marijuana for medicinal use, and while these disorders are considered chronic, a diagnosis of anxiety rarely qualifies for MMJ under most state laws. PTSD, which is the most common types of anxiety in the U.S, is the most widely-recognized anxiety disorder that explicitly qualifies under several state’s legislation.

The most important thing to understand when it comes to medical marijuana laws is that the law doesn’t allow doctors to write prescriptions for cannabis. They are only allowed to write recommendations that show that you qualify to use the drug. To obtain your medicine, you need to go to a legally recognized dispensary.

California, Massachusetts, New Jersey, and Michigan are four states that we know of which list anxiety as a qualifying medical condition.

How to get medical marijuana to treat your anxiety disorder

If you reside in a state in which anxiety has been classified as a qualifying medical condition, then you are in a good position to obtain a medical card. First and foremost, you will need to have a medical record of your diagnosis and ensuing treatments. You can get these records from your therapist, general practitioner, or specialist.

Next, you will need to make an appointment with a medical marijuana doctor for an evaluation. It may be necessary for you to meet with the doctor in person (or in some cases the doctor may just schedule a call with you) to go over your medical history, symptoms, and your previous treatment plants. They will then determine if using medical cannabis to treat your anxiety would be beneficial to you. Subject to approval, you will be issued with a written recommendation that will allow you to apply for your state-issued ID card.

You will also need to give proof of residence, along with your medical recommendation. Then, you will have to fill out the required forms and pay the applicable fee to apply for your medical marijuana card. Your card will last for one year and will need to be renewed annually. While the card is in use, it will allow you to purchase medical cannabis at any approved dispensary in your state.

If you don’t reside in one of the states that lists anxiety as a qualifying condition, all hope is not lost. In certain cases, medical professionals could make exceptions for severe ailments. In fact, most states include a clause in their laws that either allow medical marijuana to be approved for other conditions, subject to state approval, or allow physicians to make a professional decision for other conditions which aren’t listed.

This means that, regardless of if your state has listed anxiety as a qualifying condition, you should consult with a physician. If your condition is severe enough, your doctor will more than likely recommend cannabis as a treatment option.

Keep in mind that the above is the general process for applying for a medical marijuana card. The process and requirements may vary from state to state, so be sure that you understand your specific state laws about marijuana before you begin the process.

Final thoughts on getting medical marijuana for anxiety disorders

While continual legislative updates throughout America continue to override outdated prohibitions on cannabis, medical marijuana remains a controversial and heavily-regulated method of treatment. Regulations vary drastically from one state to the next, and while it may be fairly straightforward to get medical marijuana for anxiety in one state, it might not be so easy in another. It’s important that you get familiar with some of the basic requirements, rules, and restrictions on qualifying for medical marijuana in your specific state.

Visit Site
Read Review
0 responses on “Can One Get Medical Marijuana for Anxiety Disorders?”