Everything You Need to Know About Medical Marijuana and Health Insurance 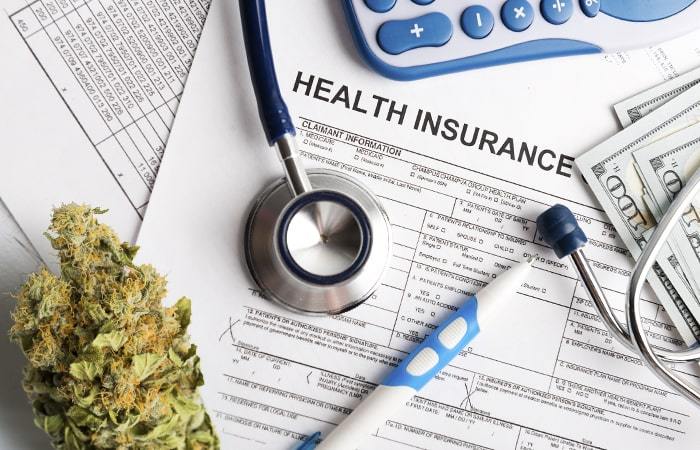 If you were to ask any non-American one thing that they know about the American lifestyle, besides the far larger food portions than you would expect elsewhere, they would absolutely mention the healthcare system.

Under this rigorous yet somehow draconian and unpleasant system, every individual needs health insurance to be able to afford medical treatment for all manner of different conditions.

However, even if you have health insurance and pay into it monthly, always relying on it in the event that you get into an accident or get sick, what does it say about your ability to access medical marijuana?

What is Medical Marijuana?

Before discussing whether or not health insurance actually covers medical marijuana, it is important to figure out what medical marijuana actually is, as this kind of thing is somehow even more complicated in the USA than anywhere else in the world.

In the USA, medical marijuana doesn’t just refer to marijuana that is used for medicinal purposes but is actually a very specific legal term denoting which people are allowed to use it and for what purposes.

Marijuana exists in a strange state at present, as it is both legal and illegal depending on where you live in the USA. Although it remains illegal on the federal level, there are thirty-three different states in the USA that have legalized medical marijuana, allowing their citizens access to marijuana for the purpose of treating all manner of different conditions.

This, of course, does create the issue that, when you use medical marijuana legally within your state, you are both complying with your local laws and breaking your federal laws, making you both a law-abiding citizen and a criminal at the same time.

In light of the fact that they are entirely non-psychoactive, you might think that insurance companies would be willing to support their customer’s usage of medical marijuana, especially as it falls under the legal purview of medically appropriate medication in their state.

However… that isn’t really the case.

Does Health Insurance Cover It?

Sadly, despite the fact that medical marijuana is fully legal in thirty-three states and is openly sold in dispensaries, as well as being recommended by accredited physicians, health insurance companies will not provide coverage for anything related to marijuana.

This means that a prescription for marijuana will not be covered under any health insurance policy whatsoever, neither the actual drugs nor the co-pay. For those not familiar with the American healthcare system, when you visit a doctor or get yourself medication, you are still forced to pay an amount of money that is entirely separate from the cost of your medication.

This is known as the co-pay and is essentially a small penalty applied by your insurance for daring to get sick or attempting to use their service. Some very specific conditions have their co-pay completely covered, but most of the time you are forced to pay the co-pay even if your insurance is covering the treatment of medication.

With medical marijuana, however, your insurance company won’t pay a penny.

There is one recent change in insurance company policies as mandated by the state of New York that does at least imply that the future might be a bit brighter for medical marijuana users; insurance companies will now have to pay for a doctor’s appointment that discusses marijuana.

Previously – and this is still the case in most other US states – if an insurance company received a bill for a doctor’s appointment from one of their users, and that doctor’s appointment contained any kind of reference to marijuana, they would refuse to cover it whatsoever.

This doesn’t necessarily mean that the doctor recommended marijuana, mind you; the word marijuana could have simply come up, or it could have been discussed as a possibility for treatment but not actually prescribed, and the insurance company would still not pay for the appointment.

Thankfully, New York State has now branded this entirely illegal, forcing all insurance companies within the state to still pay for these appointments.

However, you are still completely out of luck if you want to get medical marijuana for yourself without having to pay a crazy amount.

But why on earth are insurance companies like this? Why do they hate medical marijuana so much?

Why Are Insurance Companies So Against Medical Marijuana?

This is because of the major health insurance companies do not just exist within one state alone – instead, they operate across different state borders and governing policies, covering all manner of different patients with different conditions. It would be a massive legal quagmire were they to permit medical marijuana in one state, but then not cover it in another.

At least, that’s the argument that many insurance companies put forward, insisting that it would be functionally impossible to provide this. However, this doesn’t stop insurance companies having different policies between states for other conditions, such as is the case for the federal legal treatment of epilepsy using CBD, another product of cannabis.

Before you go entirely blaming insurance companies, though, it is important to remember that the federal government is also responsible for this legal quandary – the repeal of the Cole Memorandum was most definitely the most significant blow to marijuana acceptance in recent years.

James Cole, previously the Deputy Attorney General of the USA under President Barack Obama, issued a memo to all US attorneys and federal prosecutors, advising them not to pursue any kind of federal marijuana prohibition within states that had legalized marijuana, as an effort to not infringe on individual states’ rights.

Unfortunately, this Cole Memo was repealed in January 2018 under the new Attorney General, Jeff Sessions, under Donald Trump. This repeal meant that insurance companies could no longer rely on the federal government to not prosecute or otherwise harass them for covering marijuana usage for their patients.

Frankly, if you want to blame anyone for the sorry state of marijuana and its legal acceptance within the USA at the moment, you need to turn to the current presidency and get angry at the Cole Memorandum being rescinded.

Without it, not only do you have less protection from the federal government but so do insurance companies, as well as medical practitioners and dispensaries alike, making everything concerning medical marijuana more dangerous and far more complicated.

Although many other medical procedures and medications can cost several thousand dollars, medical marijuana only ever costs what it is priced at by a local dispensary, due to the fact that it can’t be controlled and sold by pharmaceutical companies, instead only by individual growers within legal states.

This means that the price of weed is never really going to approach the insane levels that insulin and other vital medications have risen to in recent years. Instead, medical marijuana is only ever going to be around the same price, allowing you to simply walk into your local dispensary and buy whatever you need to, whenever you want it.

The only annoyance is that your insurance provider will essentially never cover your appointments with your doctor wherein marijuana is recommended to you, so you need to find other avenues of obtaining a medical marijuana card within your state.

Thankfully, there are plenty of online services that exist to make it a lot easier to get yourself a medical marijuana prescription, giving the card as fast as possible and making it incredibly simple to go to your dispensary and pick up whatever you need.

While it isn’t a perfect system, at least the fact that your health insurance provider won’t cover your medical marijuana won’t be too much of a drain on your bank account – it could be worse, after all; you could have diabetes or need an epipen for an allergy.