How Cannabis Helps to Treat Anxiety 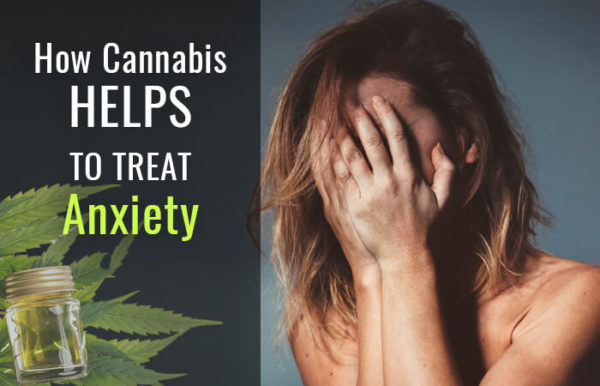 Everybody gets a little anxious from time to time – it’s a perfectly normal emotion. Occasional anxiety can be expected in life. You may feel anxious before taking a test, when faced with a problem at work, or before making an important decision. But anxiety disorders are different. They involve more than just temporary fear or worry. For someone with an anxiety disorder, the anxiety doesn’t go away, and it can get worse over time.

If you experience generalized anxiety disorder (GAD), you might have tried a variety of things to help better manage your symptoms and feel better. As more states are starting to legalize cannabis, for both recreational and medicinal use, more people are turning to cannabis as a means to manage their anxiety. Medical research in this area is still sparse, but there are anecdotal reports of cannabis creating a calming effect that may temporarily relieve anxiety symptoms for many people.

Anxiety disorders affect as many as 40 million adults in the United States. That’s about 18% of the population. Big Pharma has developed many different drugs intended to treat anxiety-related disorders, from tranquilizers such as Xanax and Valium to selective serotonin reuptake inhibitors (SSRIs) like Zoloft and Prozac. While these drugs may be effective for some patients, certain patients don’t see much improvement or are unable to tolerate the side effects.

What about cannabis? Well, surprisingly, while weed may cause anxiety for some, it can also actually help to treat or manage anxiety in others. Faith in this paradox is so strong, and anxiety is such a common issue, that a research psychologist by the name of Carrie Cuttler recently found that the number two reason that medical cannabis patients use cannabis is, in fact, to treat anxiety.

There are plenty of factors that contribute to the way cannabis affects anxiety. These include how much tolerance a patient has developed, strain composition, environmental factors, and also any pre-existing conditions a person may have. Every person may react differently to the same medication, and the same is true when it comes to cannabis. At the end of the day, for every story of someone who got paranoid after using weed, there’s another story about life-changing benefits that it’s given to someone with chronic anxiety.

Using cannabis for anxiety relief is one of the most commonly cited reasons. Therefore, doctors have started to do research into this theory that weed can be effective in reducing anxiety, and they have begun to uncover a lot of evidence.

Cannabis is described as having calming and relaxing effects. A 2014 study found that cannabis can increase the body’s production of endocannabinoids, which are molecules that are known to reduce stress levels. Another study done in Canada and published by Canabo Medical clinic found that 40% of patients in their study stopped the use of benzodiazepines completely, within three months of using cannabis.

Knowing the right dose of cannabis to take is the key to avoiding cannabis-induced anxiety. When deciding what strains is right for you, you need to consider your dosage choice, tolerance, and the environment that you in.

Knowing the right dose to take is the only way to use cannabis for anxiety. Even for a regular user, consuming too much cannabis may result in short-term anxiety. It’s best to start off with a small dose and only use more if you need to.

Anxiety is more prevalent in infrequent or new users of cannabis. Over time, users develop a tolerance to cannabis, and it helps to curb this effect. Genetic factors can also cause you to respond to cannabis in a certain way. Over time, regular users become more familiar with these kinds of responses, and therefore anxiety is less likely to occur.

Even for regular users, tolerance is never completely predictable. Even taking a break for just a few days can reset the clock on the tolerance of a regular user. When cannabis is used in an unfamiliar or stressful setting, it’s possible that the body will have a temporary reduction in tolerance. In other words, you need to be cautious about where you are when you use cannabis to treat anxiety.

Cannabis as a substitute for anti-anxiety medication

Preliminary research that has been done on cannabis and anxiety shows that cannabis has similar components to pharmaceutical drugs for anxiety symptoms. Benzodiazepines (Xanax and Prozac) are some of the most commonly prescribed types of anti-anxiety medications. They work by managing the levels of a neurotransmitter known as GABA, which balances anxiety levels. The major downside is that patients who use these drugs tend to build a tolerance to them quickly, and this results in thousands of overdoses each year.

Cannabis, on the other hand, also affects GABA levels, and there is no risk of building up a tolerance or overdosing on cannabis. Early research studies found that cannabis components, especially cannabidiol (CBD), also work by managing the amount of GABA in the brain. Cannabis has also shown potential for lowering levels of cortisol, which is a hormone that indicates how much stress you feel. Lower cortisol levels create a dulled reaction to stress.

The wonderful thing about cannabis is that it can serve as a holistic alternative to conventional anxiety medication, without any of the typical side effects. Cannabis doesn’t come with the same risk of addiction and overdose that your typical pharmaceutical medicines come with.

How cannabis can treat anxiety

There is an important system in our bodies known as the endocannabinoid system (ECS). This is the system that is responsible for regulating important body functions, such as pain perception, sleep, and mood. The ECS consists of multiple chemical compounds and receptors that are dispersed throughout the body. The cannabinoid receptors are known as CB1 and CB2, and are found mostly in the brain and other components of the nervous system.

According to the NCBI (National Center for Biotechnology Information), the ECS has recently been recognized as a crucial modulatory system in the function of the endocrine, brain, and immune tissues. It seems that it plays a vital role in the secretion of hormones that are related to reproductive functions and response to stress. The ECS doesn’t only regulate the central and peripheral mechanisms of food intake, but also lipid synthesis and turnover in the adipose tissue and liver, as well as glucose metabolism in muscle cells. According to the NCBI, the endocannabinoid system is directly involved in the regulation of fear and anxiety.

Many cannabis strains contain THC, one of the most researched marijuana compounds. It is also responsible for creating the psychoactive effects, commonly referred to as a “high.” But, THC isn’t just known for producing a high; in low doses, cannabis containing THC can be helpful in the treatment of anxiety. However, in high doses, it may be counteractive and in fact stimulate anxiety.

Cannabidiol (CBD) is another important compound of cannabis. CBD doesn’t induce the high that THC does and is notorious for its multiple health benefits. Research has shown that CBD exerts several actions in the brain which explains why it may be effective in treating anxiety and other mental health illnesses.

Before we continue, it’s important to note that the majority of research that describes how CBD works is based on animal studies and for the most part preclinical. Naturally, results from animal studies don’t always transfer to human therapies. But, these studies provide insights that move in the right directions.

This is a subtype of the serotonin receptor. Depression and anxiety are often treated with medications that target the serotonin system. SSRIs like Prozac work by blocking the reabsorption of serotonin in the brain, and this increases the availability of serotonin that is in the synaptic space. This is what helps the brain to transmit more serotonin signals, which may help to improve mood and reduce anxiety. CBD works in a way much like SSRIs, by boosting signaling through serotonin receptors. During an animal study, Spanish researchers discovered that CBD enhanced 5-HT1A transmissions and could potentially affect serotonin faster than SSRIs.

The hippocampus is an important brain area and plays a crucial role in various functions of the brain. It’s well-known for its role in memory formation and cognition. Brain scans that have been done on patients who suffer from either anxiety or depression often show a smaller hippocampus. Depression treatment is associated with neurogenesis (the birth of new neurons) in the hippocampus.

An animal study that was conducted on mice found that the repeated use of CBD could potentially help the hippocampus to regenerate neurons, which may be useful in treating anxiety and depression. Research has shown that both CBD and SSRIs could promote neurogenesis.

It’s important to keep in mind that the use cannabis won’t necessarily “cure” anxiety. However, it could greatly improve the quality of life for those who suffer from anxiety. Research into cannabis use and the treatment of anxiety is still in its infancy, but studies thus far have shown some positive results. If you are thinking about using cannabis to treat anxiety, remember to keep dosage, tolerance, and environment in mind. Too much THC could have the opposite effect, so do your research and make sure that you choose the right strain.