How do Doctors Feel About Medical Marijuana? [OPINION] 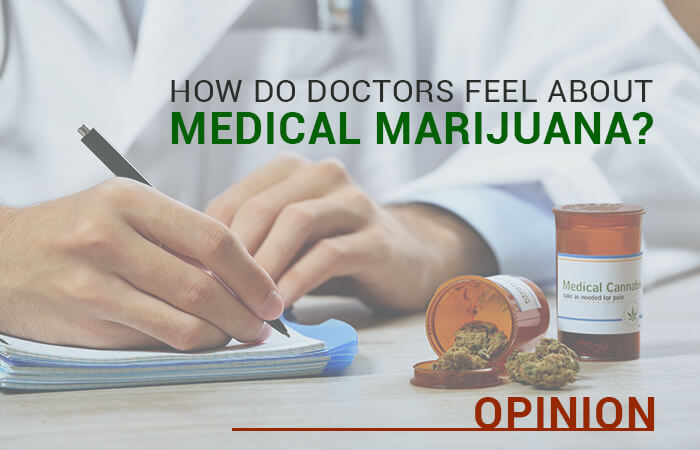 A hot topic of debate in many circles relates to the existence and use of medical marijuana. It’s a complicated, not to mention controversial, matter because of the conflicting rulings on its accessibility and legality throughout the United States. Medical marijuana is currently legal in 29 states, and recreational cannabis has been legalized in eight states plus Washington D.C. However, thanks to ancient myths, there’s still a lot of stigma around discussing it with medical professionals.

In a more positive light, support for medical cannabis is increasing in the U.S., with 84% of adults saying that they support giving the doctors the right to recommend it. Also, 53% of Americans support the use of marijuana recreationally. The only community that has remained quiet on the issue until recently are doctors themselves. A lot of doctors have kept their opinions on marijuana quiet for fear of retaliation, but recent state laws and a change in public opinion have encouraged a number of physicians to speak up. Let’s take a closer look at how doctors feel about medical marijuana.

What research says about doctors and medical marijuana

A 2014 survey* done by Medscape and published on WebMD found that the majority of doctors in the United States thought that medical marijuana should be legalized nationally since it can deliver real benefits to patients. The WebMD website – which is for health professionals – surveyed 1,544 doctors and reported that most doctors were in favor of medical cannabis being legalized in their respective state. The survey included doctors from more than 12 specialities and 48 states. Here’s a summary on the responses received from doctors:

The difference in support between doctors who want it to be a medical option for patients compared to those who support total legalization could stem from the view that they have toward national or local control. Some doctors may prefer that medical cannabis use is driven by FDA guidelines.

Interesting to note is that the support for medical cannabis varied by speciality. For instance, hematologists and oncologists showed the highest level, with 82% stating that marijuana delivered real benefits to their patients. These same specialities were also the most likely to state that medical marijuana should be a medical option for patients. Rheumatologists were the specialty that ranked the lowest on that question – 4% said that marijuana delivered benefits to patients. With 70%, neurologists reported the highest number of patients that were asked if medical marijuana could help them.

Another survey* found that nearly half of U.S. cancer doctors reported having recently recommended medical marijuana to patients, but most said that they didn’t know enough about medical marijuana use. Most patients want to know what their doctors think about using cannabis. In this same study, doctors reported that conversations about cannabis were almost always started by patients and their families, rather than doctors themselves.

The survey was done among a random sample of cancer doctors. Completed surveys were received from 237 doctors. Overall, about eight in ten doctors reported having talked about medical marijuana with their patients, with 46% saying that they have recommended it for pain and other cancer-related problems at least once in the past. Of those who said that they recommended cannabis, 56% said that they didn’t have sufficient knowledge to do so.

The truth is that solid data on the health benefits of marijuana are lacking because research has been limited due to the federal government designating cannabis as a schedule 1 substance. This is a designation used for the most dangerous drugs which are ruled to have “no accepted medical use and a high potential for abuse.”

But, as state after state has started to legalize marijuana over the years, doctors have gained nearly two decades of anecdotal evidence about its effects and benefits. Dramatic stories of families travelling to states like Colorado for a special strain of cannabis to treat their children’s seizure disorders have led to stronger calls for research.

Recently, the Epilepsy Foundation called on the Drug Enforcement Administration to cool its restrictions on cannabis so that it can be properly studied, as two prominent epilepsy researchers did in a recent New York Times op-ed. The medical community is clearly stating that they support the use of marijuana for any number of medical problems. In fact, many doctors do already recommend it. However, health professionals are still unclear on what the long-term effects are. Research findings indicate that there is a strong desire to have the DEA ease up on research restrictions so that more studies can be done to determine where medical marijuana can help and where it might not.

Some doctors feel completely in the dark about medical marijuana

Medical marijuana has been legal in some states, like Maine, for almost 20 years. However many physicians, as explained by Jean Antonucci who is a physician in Farmington, feel unprepared when they need to counsel sick patients on whether the drug could benefit them.

While she said that she and most of her colleagues could answer questions as to whether cannabis can help specific conditions, they are completely in the dark when it comes to guiding patients on the actual use of cannabis. She went on to say that she doesn’t know if cannabis is the right way to treat an ailment, whether a patient should smoke it, rub it on through an oil, eat it, or vaporize it, and what amount is an appropriate dose. Just like most doctors, she has never been trained to have these discussions. Since the topic is often still not covered in medical school, seasoned doctors and younger ones alike still consider themselves to be ill-equipped.

As you can imagine, although many of these doctors try to keep up with scientific literature, it’s difficult to support patients when they don’t know what they’re talking about. As Wanda Filer – the president of the American Academy of Family Physicians – put it “We just don’t know what we don’t know. And that’s a concern.” Each state has a process in a place to establish marijuana dispensaries. Qualifying medical conditions are specified on a state-approved list, and the role of doctors is to certify that patients have one of these ailments. But many physicians say that it isn’t that simple, since without knowing the health effects of marijuana, they feel uncomfortable even writing a certification. This medical uncertainty is further complicated by confusion as to how to navigate often contradictory laws.

The good news is that, as the number of states which allow medical marijuana continues to grow, some are working to address the knowledge gap by introducing physician training programs. States are starting to require that doctors take continuing medical education courses that detail how cannabis interacts with the nervous system and other medicines, as well as its side effects.

How to talk to your doctor about medical marijuana

Marijuana can ease many ailments, and different strains of weed can do different things. Unfortunately, most medical schools don’t teach doctors about the science of the endocannabinoid system (ECS). Instead, they teach that marijuana is a form of drug abuse. Therefore, many doctors don’t know about the multitude of conditions that marijuana can help with or the various ways that it can be consumed. You will need to have all this basic knowledge yourself.

Remember that all the communication that you have with your doctor is confidential. If you’re already consuming marijuana, then let your doctor know. Also, if they’re worried that they will get into trouble for talking about it with you, they shouldn’t be, because they are legally protected by doctor-patient confidentiality.

Explain to your doctor what you’re using or what you want to use and what results you are hoping for. This is where the homework that you’ve already done comes into play. The reason that many physicians opt to become medical marijuana specialists is that they have a family member, friend, or patient who enquired with them about using cannabis. Often, they may not know much about using medical marijuana, and this will prompt them to do their own research. This research will more than likely lead them to peer-reviewed articles from quality scientific journals about the therapeutic benefits of cannabis, such as the anti-inflammatory and neuroprotective properties of cannabinoids. Consequently, this encourages them to educate themselves further on medical marijuana.

Essentially, you may be the one who educates your doctor or changes their mind about marijuana, potentially opening the door for further treatment options for patients and doctors.

Know when to walk away

If you’ve done everything right – read up on medical marijuana, researched studies, you knew the pros and cons and had an honest conversation with your doctor – but they’re still resistant to prescribing cannabis, then walk away. There could be many reasons for them not taking to the idea of medical marijuana; these may be either personal or professional reasons. However, this doesn’t mean that it’s the end of the discussion for you. It means that you need to consider finding a different doctor who is more open to making medical marijuana a part of your overall treatment.

If you don’t currently use medical marijuana but have a friend who does, then ask for a referral to their doctor. There are also many websites and apps with directories of physicians who specialize in or at least include cannabis as part of their treatment options.

Final thoughts on how doctors feel about medical marijuana

It seems as though while many doctors do certainly support the use of medical marijuana, most are not well-informed on the ins and out of cannabis along with its therapeutic benefits and effects. Ultimately, marijuana policies in most states have outpaced research and doctors’ education.

Hopefully, we will see an increase in the number of doctors being educated on medical marijuana, which would make them more comfortable discussing the topic of cannabis with their respective patients. We can only assume that medical marijuana would become a part of the medical school syllabus as it becomes a more popular form of treatment.