How Hard is it for Me to Get My Marijuana Card in Michigan?

Blog / How Hard is it for Me to Get My Marijuana Card in Michigan?
Share
Tweet
Pin 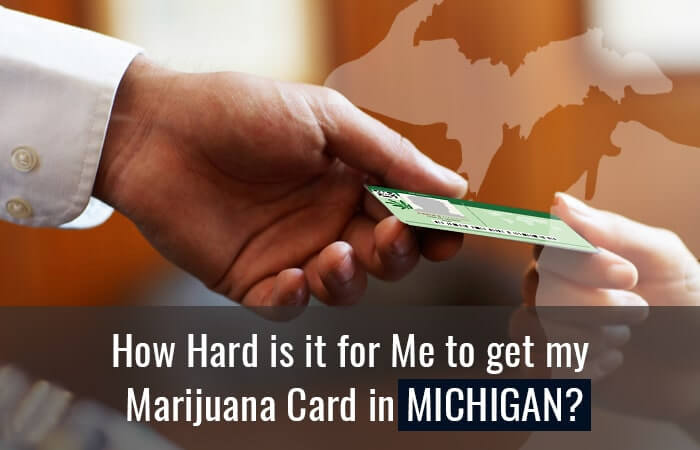 You likely know a thing or two about the miracle that is marijuana and are wanting to give it a shot. But, you’re possibly wondering; how do I get medical marijuana in Michigan? Since marijuana is still considered as illegal at a federal and state level if used recreationally, it’s not very easy to get your hands on unless you are in possession of a medical marijuana card.

According to the state’s most recently published data, there are approximately 218,558 registered medical marijuana patients and 38,107 caregivers across Michigan. Since 2012, the number of registered patients has increased by more than 70%. According to the data that has been released by the Michigan Department of Licensing and Regulatory Affairs, the state initially denies about 16% of the medical marijuana applications that it receives. Some applications are denied by regulators for clerical errors like incomplete paperwork, and patients do have the chance to reapply.

It’s important to note that only applicants that use the official Michigan Medical Marijuana Program are able to obtain a registry ID card. While there have been reports of third-party licensing and word that a completed application and physicians recommendation can serve as a temporary registration card, this is not the case. You are only allowed to purchase medical marijuana in Michigan if you have an official medical marijuana card. Here’s what you need to know about getting your Michigan card.

How to get your medical marijuana card in Michigan

The medical marijuana card allows anyone who qualifies for the card to legally access marijuana. The card will basically exempt you from state law which would otherwise probably throw you in jail for either using or carrying weed. Being in possession of the card allows you to grow your own marijuana, gives you access to dispensaries (instead of shady back-rooms), and acts as a Get-Out-of-Jail-free Card – you won’t go to jail for using, growing, or possessing cannabis.

Step 1: Find out if you qualify for the card

Michigan state law specifically lists eight medical conditions that would allow a person to qualify for a medical marijuana card. These include:

Step 2: Find a doctor who will help you get the card

It is necessary to get a physician’s approval to get your hands on a medical marijuana card. A medical doctor will need to sign a form to certify that the patient does, in fact, suffer from one of the qualifying debilitating medical conditions that may be alleviated with the use of medical marijuana.

As you might already know, either from your own experience or from doing your research, it can be pretty hard to find a medical marijuana doctor in Michigan. But this isn’t always the case, and some people have found it surprisingly easy to find a doctor who is willing to support their quest to use marijuana to help them to deal with their illness.

The state of Michigan doesn’t provide a list of physicians online who will recommend medical marijuana. Since marijuana is still illegal under federal law, some doctors may be reluctant to give out medical marijuana certifications. In Michigan, you have to see your physician face-to-face, bring a state-issued ID along with you to your appointment, and have medical records that prove that you have the qualifying condition. Your paperwork will then be sent off and approved by the state, who will then send you your card.

In Michigan, it’s essential and required by the state that there is a legitimate patient/physician relationship. The doctor should be in a business location, require medical records, and should have an ongoing relationship with the patient. While there are some states, such as New York and Pennsylvania, that require doctors to have specialty training in the medical uses of cannabis, Michigan doesn’t have this requirement.

Step 3: Apply for the card

Once you’ve consulted with your doctor and they’ve certified that you qualify for the medical marijuana card, you can go ahead and begin the application process. Here is a list of things that you would need for your application:

On the last page of the official MMMP (Michigan Medical Marihuana Program) application form which you can find here, you will find the physician recommendation form, which is what needs to be filled out and signed by your recommending doctor and submitted with the other documents mentioned above.

Getting an MMJ card in Michigan

The most difficult step when it comes to getting your medical marijuana card in Michigan will likely be finding a doctor who can complete your recommendation. The most commonly abused section of the Medical Marijuana Act is thought to be doctors that give patients certifications. It’s believed that anyone who wants to get a card can get one through a doctor who advertises doing so. Prosecutors, courts, and police all believe that getting a medical marijuana card is east, which may or may not be true. What is true is that a prosecutor or court who wants to be difficult about MMMA defense will attack the doctor/patient relationship, as it must be bona fide.

Visit Site
Read Review
0 responses on “How Hard is it for Me to Get My Marijuana Card in Michigan?”