How to Get a Medical Card in Oklahoma [Laws and Process] 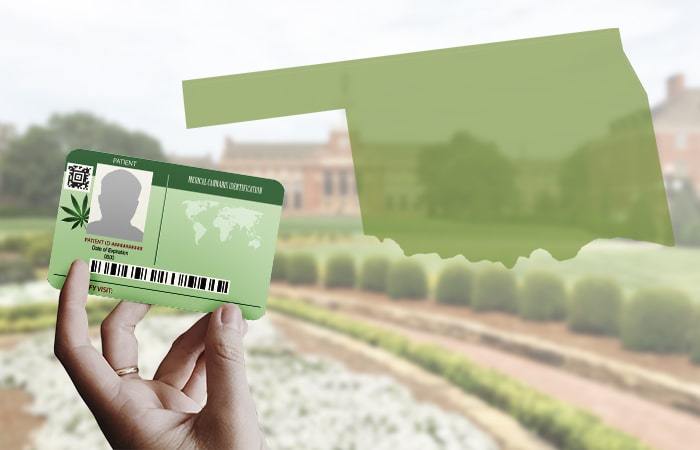 As of early 2018, Oklahoma became one of the newest states to legalize medical marijuana card, finally allowing its residents access to marijuana to treat a variety of different medical conditions.

However, as always seems to be the case with new states that legalize marijuana, it is not really 100% clear exactly what the process is to get yourself a medical marijuana card and obtain medical marijuana. In some states, it is as easy as walking up to a doctor and vaguely gesticulating that you want a weed card, but in others, it requires a whole lot more effort and doctor’s approval.

So, what exactly are the laws and processes that go into you getting a medical card for medical marijuana in Oklahoma?

What Does a Medical Card Get You?

Before you can go and get yourself a medical card, you need to figure out exactly what a medical marijuana card gets you in the state of Oklahoma.

Many people erroneously believe that a medical marijuana card means that your doctor has given a prescription for marijuana, in much the same way that you would get a prescription for painkillers or any other kind of medication that requires a larger dosage than a simple over the counter drug packet could provide.

However, marijuana prescriptions are actually federally illegal in the United States, making it impossible to obtain one. Instead, a medical marijuana card in the state of Oklahoma, just like with many other states, is merely a doctor’s approval to pick up your own medical marijuana at a dispensary yourself.

This means that a medical marijuana card does not get you any free weed or even an official government recommendation for weed; it is merely a heavily implied suggestion that you should probably go and buy yourself some weed and confirmation that the state promises to not prosecute you for it.

It’s a bit of a strange system.

So, now that we know what a medical marijuana card is, we need to learn who it is that can actually go and get one for themselves in the state of Oklahoma.

Despite the fact that there are so many different US states that have legalized medical marijuana, there still isn’t any consistency between states as to the process of actually getting your marijuana.

In some states, only certain conditions are allowed to be recommended marijuana by their doctor, necessitating you to be able to prove that you have one or more of these conditions before you can get your medical marijuana.

Most often, these conditions are things like epilepsy, glaucoma, and neuropathic pain disorders, things that cause pain and irritation or otherwise pose a hazard to yourself or others and that can’t be easily tackled by regular medicine.

However, the state of Oklahoma is very different.

Instead of providing a long list of acceptable conditions, Oklahoma doesn’t have a list whatsoever; instead, the discretion of whether or not to approve a medical marijuana card request is entirely up to the individual doctor.

This means that, theoretically, anyone in Oklahoma can get a medical marijuana card. However, you still need to try and convince your doctor! Although the aforementioned conditions aren’t a legal requirement for a medical marijuana card in Oklahoma, you are still much more likely to get your doctor’s approval if you are categorically suffering from one of those conditions.

Additionally, you need to meet a few other basic criteria: You need to be able to provide a Proof of Identity using a state-issued Driver’s License or Identity Card or at the very least a valid U.S. Passport that has your state clearly listed on the identity page.

Additionally, you need to be able to provide proof of residency – this means something like a bill or other form of mail that has your address and name on it, both of which are registered to the state of Oklahoma. This is to make sure you aren’t participating in something called “Medical Tourism,” whereby people from states without legal medical marijuana drive or fly into Oklahoma for the purpose of getting their own marijuana.

Assuming you can meet all these criteria, you are considered perfectly able to get yourself a medical marijuana card. But how do you actually go about doing that? What are the steps you need to take?

How Do You Actually Get a Medical Marijuana Card?

Once you have found one, book an appointment with him or her and work on convincing them to give you a medical marijuana card.

Although you can just walk in and say you suffer from a particular condition and ask to be recommended a medical marijuana card, there are a few things you can do increase the likelihood that this will be successful.

For starters, you can print out and bring with you a copy of the Physician Recommendation Form that the official Oklahoma Marijuana Association, known as OMMA, issues and requires doctors to fill out.

By bringing this with you, you make it incredibly easy for your doctor to approve your request and sign on the dotted line.

However, if your doctor is unwilling or uncooperative, do not, under any circumstances, act aggressive or confrontational with him or her. Remember, you are trying to elicit a recommendation from a medical professional, someone with recognition within their own community – if you go in all guns blazing and acting aggressive, especially if they turn you down, then they are not only going to kick you out of their office, they might spread the word about you to other doctors in the area, making it almost impossible to get an appointment.

If your doctor does not give you a recommendation, simply thank them for their time and try again at a different doctor. Just remember that family orientated doctors are likely to not recommend marijuana for fear of upsetting their likely conservative clientele base.

From there, you can go to your local dispensary and pick up all the medical marijuana you are entitled to.

However, some people find this far too complicated; finding a doctor, getting them to actually sign the form, submitting it all online – it can all be a bit much.

So, what do you do if you want someone else to take care of it for you?

Like all things in the USA, if there is something that is worthwhile to do but is too time-consuming, there is most likely going to be a company that will do it for you.

From there, they will fill in all the information that you provide for them and get you your medical marijuana card; it might cost a little more, but it is definitely a whole lot easier than having to do it yourself.

Final Thoughts on How to Get a Medical Card in Oklahoma

In the great state of Oklahoma, many residents have long thought that they would never have access to Medical Marijuana, likely having completely put away any desires to try and self medicate themselves using Weed – after all, it would never pass in Oklahoma, right?

Well, Oklahoma now has legal weed, and more and more people are finally getting access to their very own medical marijuana cards. The only problem is the inherent difficulty in trying to figure out where to actually get one.

But, as long as you are prepared to either pay a premium with services like Veriheal to do it for you, or to spend an inordinate amount of time at different doctor’s appointments striving to find the right doctor that will accommodate your wishes, then you will eventually get your hands on a medical marijuana card.

It might still be a bit of an uncertain world when it comes to legalized medical marijuana, but at least in Oklahoma, you can get one pretty easily.