How to Get Marijuana in California [Step by Step Guide] 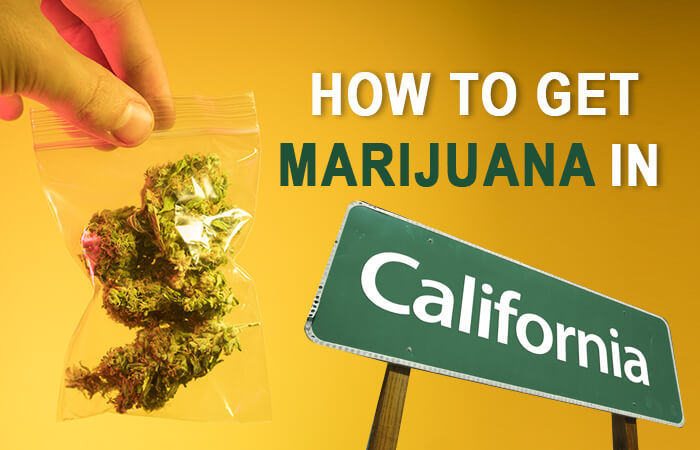 California has entered a whole new era of legal marijuana; it’s no secret that the days of prohibition are long gone in the rearview mirror. Although marijuana has been legal for medical reasons in the state since 1996, the Adult Use of Marijuana Act (also known as Proposition 64), was only approved by California voters on November 8, 2016.

“Adult use” simply means that cannabis is now legal in California for any adult 21 years of age or older — no medical card required. In other words, weed is legal for recreational use in California.

While this law was initially passed in 2016, it took the state until January 2018 to begin opening dispensaries for the sale of recreational marijuana. Of course, a lot of questions still remain as the Golden State isn’t just transitioning from a medical-only state to a fully recreational one; it’s also transitioning from a mostly unregulated market to a tightly controlled regime. There are new rules, laws, and regulations governing exactly where – and how – you can use and buy marijuana in California.

Essentially, as of January 1, 2018, anyone who is old enough to buy alcohol is old enough to purchase legal marijuana. California became the sixth state to allow marijuana to be sold in licensed shops to anyone with an ID showing that they’re 21 or older – just like buying alcohol from a liquor store. Here is everything you need to know about how to get marijuana in California.

The Difference Between Medical and Recreational Marijuana in California

First, it’s important to understand the difference between medical and recreational marijuana in California. These of course differ in several ways, ranging from the composition and potency of the drug to the reasons for its use and legality. Medical marijuana uses the whole, unprocessed cannabis plant – or chemical extracts of the plant – to treat symptoms of medical conditions. Recreational marijuana, on the other hand, is weed that is used without an official medical recommendation.

The cannabis plant is made up of over 100 chemicals, known as cannabinoids. Each of these cannabinoids has various interconnecting effects on the body. The two most well-known chemicals are Tetrahydrocannabinol (THC) and Cannabidiol (CBD). THC is the psychoactive component of pot, meaning that it produces the high, while CBD does not produce any psychoactive effects.

Since you don’t experience the euphoria with cannabis products that are high in CBD and low in THC, many medical patients are starting to gravitate towards them as opposed to recreational pot, which is typically very high in THC (providing the user with the “high” they are looking for).

Ultimately, if you live in a state where recreational marijuana is legal – like California – you won’t need any paperwork to get your hands on some pot.

Although recreational marijuana is now legal in California, the law doesn’t offer the complete freedom to buy, smoke, or grow marijuana anywhere you please. In reality, the rules and regulations are actually fairly strict. Perhaps the biggest complication, of course, is that marijuana still remains illegal on a federal level.

According to the Adult Use of Marijuana Act (Proposition 64), California marijuana law permits any adult 21 years of age or over to purchase, possess, and consume up to one ounce of cannabis either in their private residence or in an establishment that is licensed for cannabis consumption. For reference, an ounce of weed is enough to fill a few dozen regular-sized joints. Alternatively, you are able to buy up to eight grams of cannabis concentrates, which include products like marijuana edibles, oils, waxes, etc.

That said, the number of edibles you are legally allowed to possess in California may depend on the product itself. For instance, a jar of cannabis butter usually contains a more concentrated marijuana content than a single edible. Therefore concentrate-heavy products may push the carrier over the legal 8-gram limit.

Regardless of what type of cannabis product you want to buy in California, you will need to find a licensed dispensary that is approved for recreational sale. The Medicinal and Adult-use Cannabis Regulation and Safety Act is the law that regulates commercial marijuana activity in California; it requires anyone engaged in commercial marijuana activity to be licensed, and allows local government to control which activities are permitted – and which are not – under their jurisdiction.

Furthermore, the Bureau of Cannabis Control (BCC) is responsible for licensing distributors, testing labs, retailers, and other marijuana-related businesses in California. They have a complete and updated list of licensed dispensaries available on their official government website, so be sure to check that out if you’re wondering where – or how – to buy weed in California.

Also important to note is the difference between medical and recreational marijuana dispensaries in California. Dispensaries who are only licensed to sell medical marijuana in California won’t be able to serve you unless you are a registered MMJ patient that holds a valid doctor’s recommendation (otherwise known as your medical marijuana card). State law also requires ALL dispensaries (both medical and recreational) to close by 10 pm, so don’t expect to get your hands on some pot in the middle of the night.

Medical marijuana dispensaries in California are designed to give patients safe access to regulated cannabis products that can be used to treat their conditions. These products are taxed and regulated differently to recreational ones, and therefore the price of cannabis will usually vary between the two.

In many instances, licensed dispensaries will offer products to both medical patients and recreational customers alike. Of course, if you want access to the medical MMJ products you will need to come prepared with the correct documentation – in other words, be registered as a valid MMJ patient in the state of California.

Recreational-only dispensaries, on the other hand, require fewer prerequisites. Here is all you should know before setting foot inside a recreational dispensary in California:

In summary, anyone who meets the above requirements can buy recreational marijuana in California. However, you will need to have a doctor’s recommendation to purchase from a medical one. The main differences between the two will be the price, while variations in content and product potency can also exist as well.

How to Get a Medical Marijuana Card in California

If you are considering applying for medical marijuana in California (due to the tax breaks and other advantages you receive), be advised that the process is incredibly simple and can usually be completed online in minutes with NuggMD.

This is a unique 100% online medical marijuana clinic that has more or less revolutionized the medical marijuana industry for patients all around California, as well as New York and Nevada. NuggMD eliminates the hassle of having to find an in-person cannabis clinic (otherwise known as a “420 doctor”), schedule an appointment, go all the way to them, and gather various forms of required paperwork.

Simply put, NuggMD offers a 100% online medical marijuana approval in California; it’s quick, easy, and in most instances, you can get approved on the same day that you have your online consultation. And since it’s an online service, you can submit your paperwork 24 hours a day, seven days a week.

[For further information and/or to start the process, check out the official NuggMD website].

Other California Marijuana Laws to Consider

Regardless of the fact that medical cannabis has been around for awhile and is now completely flourishing in California, there are still misconceptions as to whether the purchasing limit differs for medical vs recreational marijuana. To put it simply, it does.

If you think you will need more than an ounce of marijuana at a time, for example, or if you would like to grow more than six plants in your home, you might think about applying for a medical marijuana card in California. Also, it’s worth pointing out that medical users sometimes have access to may more potent products than recreational customers. For this reason, it may behoove patients who rely heavily on marijuana as a pain management tool get a medical card. A card also offers more flexibility; for instance, you can only buy recreational marijuana from a recreational dispensary, but patients with a medical card can buy legal weed in California from any dispensary.

One interesting thought however is that for California recreational users, there is currently no official tracking system (at least not that we’re aware of) that is used to keep tabs on how much cannabis you purchase per day. So technically, you could try and go to numerous dispensaries in the state and buy up to an ounce, and nobody would likely question you. However, bear in mind that THIS IS ILLEGAL, and if you possess more than an ounce of marijuana on you, you risk criminal punishment.

Here are some additional California marijuana laws to consider:

Final Thoughts on How to Buy Marijuana in California

Despite its continued prohibition at the federal level (or perhaps because of it), the legalization of marijuana laws in California has no doubt created some confusion. Simply put, although cannabis has been legalized in the state, there are still ways to be in violation of the law. These include growing or possessing more than is allowed, or failing to comply with the regulations that govern commercial marijuana activities.

In some cases, it is still entirely worthwhile to get a medical marijuana card in California. If you suffer from a qualifying medical ailment, a medical card may allow you to receive benefits, as well as purchase larger amounts of cannabis and different strains. Whichever option is right for you – be it medical or recreational marijuana in California – make sure that you are on the right side of the law.