How to Talk to Your Doctor About Medical Marijuana 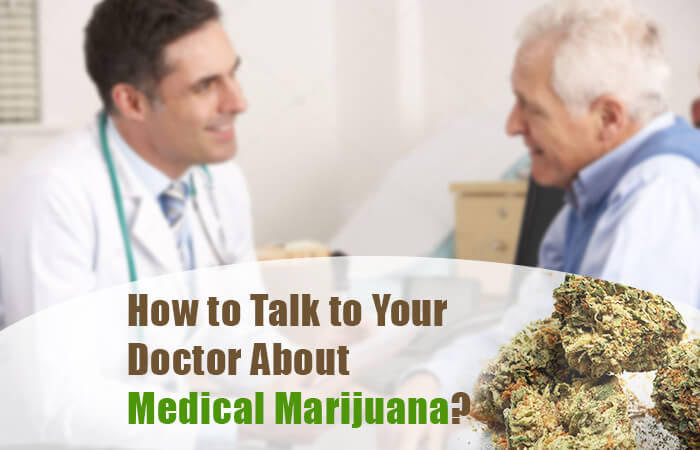 The tide is certainly turning with regards to marijuana usage in the United States. A Gallup poll from October 2017 placed support of weed legalization at 64% – by far the highest level since the question was first posed in 1969. Shockingly, given their history of opposing cannabis, Republican voters’ support for legalization is now at 51%!

While we can at least celebrate the fact that the majority of people no longer have negative views of marijuana, it is still only legal for medicinal or recreational use in 29 states plus D.C. Also, even the medical industry is very much divided on whether cannabis should be legal as a medicine.

As a result, there are plenty of physicians in states where weed is legal for medical use that will not approve you for a medical marijuana (MMJ) card. In such instances, they are your only shot of legal use of the herb, so it is often a consultation filled with trepidation.

Unless you’re speaking with a doctor well-known for approving your 420 request, it is usually an awkward situation and one that must be handled with care. In this article, we offer you some important advice when it comes to speaking with your physician about medical marijuana.

Is it Medical Marijuana Legal?

This is an important question because marijuana is still illegal on a federal level. Theoretically, the U.S. Government could decide to arrest people for marijuana possession en-masse, even in the 29 states where it is legal for medicinal or recreational use. Indeed, Attorney General Jeff Sessions has implied that this is precisely what he wants to do.

However, in the 2002 case of Conant v. Walters, the U.S. Court of Appeals for the Ninth Circuit affirmed the right of doctors to recommend medicinal weed, and that of patients to ask for advice on therapeutic marijuana. As a result, you don’t have to worry about ending up in handcuffs for broaching the subject!

With so much information at your fingertips, you have no excuse for walking into a physician’s office with no clue about what weed can do, what it treats, or whether you’re eligible. The truth is, research on cannabis is still in its infancy, but studies have so far revealed its capacity to work with our Endocannabinoid System (ECS). Sadly, since few medical schools teach doctors about weed and the ECS, too many still believe it is a drug used to get ‘high’ and nothing more.

The question of eligibility is another significant issue. In the 20 states where weed is legal for medicinal use only, patients must meet different criteria to be approved. In the state of Massachusetts for example, you could be deemed eligible if you suffer from one of the following medical ailments:

You also have a chance of approval if you can show evidence of Chronic Pain, Depression, RA, Anxiety, Anorexia and a few more maladies. We recommend perusing your state’s medical marijuana law to learn more about potential eligibility.

Remember, it isn’t illegal to ask about medical marijuana so there is absolutely no need to disguise your intentions. The worst thing that can happen is that the physician refuses your request, and you won’t get your MMJ card without asking! While it is certainly true that some doctors continue to hold outdated opinions about weed due to lack of knowledge, an increasing number are seeing the light and have an open mind on the topic.

The only way you’ll get in trouble is if you plan to give it to a child or a pregnant woman and mention this to the doctor. In that case, you deserve to be in hot water!

If you have a medical condition that’s causing you misery and traditional medicine isn’t working, outline how hard life is for you now. The vast majority of physicians will have sympathy for your plight. It is also important to give the doctor a clear picture so they can decide if you are eligible. When in doubt, most physicians will err on the side of caution and not approve you for an MMJ card. Make sure you share your symptoms and tell them why you think medical weed will help.

As your conversation with the physician is confidential, you can feel free to tell them if you are already taking marijuana. If you are, it is a good idea to share the following information:

In some cases, this could prove a futile measure if the doctor’s knowledge of marijuana is limited to repeat viewings of Reefer Madness. However, you should ask questions to determine whether weed could damage your health or interfere with your life in another way. Good questions to ask include:

Know When to Give Up

If you’re really unlucky and your doctor is a mixture of Jeff Sessions and Harry Anslinger, it is best to move on because you’re only hitting your head against a brick wall. There are still plenty of physicians who view marijuana in a negative light, even though they have no issue prescribing opioids that could kill their patients.

If the doctor turns you down, don’t give up! There are more cannabis-friendly medical professionals than ever before, so you should research your local area and find out if there are any such physicians close to where you live. If all else fails, get in touch with a local dispensary, as they are likely to have details of doctors known to approve patients for MMJ cards. You will have to speak to them by phone because only existing MMJ card holders are usually allowed in these locations.

Want to obtain a medical marijuana card? Find out which is the best MMJ card provider