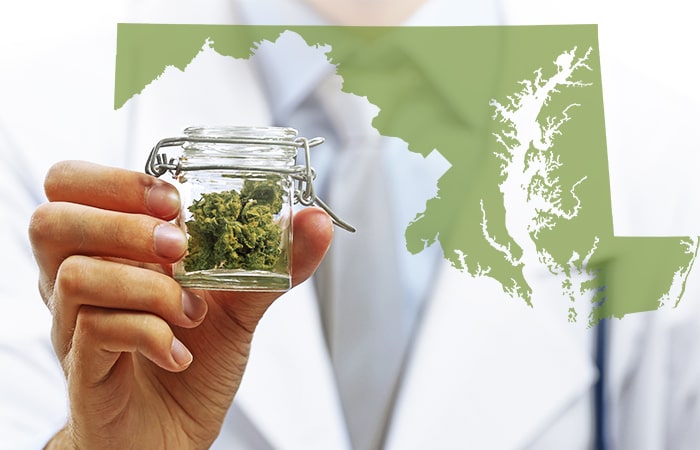 Maryland is one of 33 states in America that have legalized medical marijuana. However, unlike many other states, it is yet to approve marijuana for recreational purposes. In 2010 Maryland had one of the highest arrest rates for marijuana possession in the country; this has led to a discussion about its legality and whether it needed to be changed. In May 2013, Governor O’Malley approved the legalization of medical marijuana, but it was not until December 2017 that the law actually came into force. In the meantime, the laws surrounding recreational marijuana were loosened, with possession of 10 grams or less being decriminalized in 2014. It is now treated in much the same way as traffic tickets are.

By December 2017, the Maryland Medical Cannabis Commission (MMCC) had authorized 14 growing facilities, 12 processors, 9 dispensaries and 550 health care providers were authorized to access patients and provide written certification for medical cards. Everything was in place, and after four years medical marijuana become legal in the state of Maryland. Around 8,500 patients were originally granted medical marijuana cards, this number has since increased to just under 40,000, almost 7% of Maryland residents.

So, who exactly can apply for a medical marijuana card in Maryland?

The website also states that other chronic medical conditions which are severe and for which other treatments have been ineffective will be considered; this means that if you suffer from a condition that is not on the list, it will be up to your doctors to make the final decision.

How Can You Get a Medical Marijuana Card?

Assuming that you have one of the qualifying conditions listed by the Maryland Medical Cannabis Commission, you can start the process of applying for a medical card. Obtaining a medical marijuana card in Maryland can feel like a long and drawn out process; this is partly due to the Maryland Medical Cannabis Commission not being prepared for the overwhelming number of applications they would receive. The lack of preparation has resulted in a backlog, which they still two years on seem to be working their way through.

Let’s take a look at the steps you need to follow in order to become a medical marijuana card holder.

Currently, only Maryland residents can apply for a medical marijuana ID card. Back in 2017 when the cards were first introduced, out of state residents could apply as long as they met certain requirements. However, on the 14th October 2017, all out of state applications were put on hold. It was planned that this restriction would only last for 60 days and give the Maryland Medical Cannabis Commission a chance to catch up with the backlog of applications, but a year and a half on they have still not reopened applications.

Your first step is to log onto the Maryland Medical Cannabis Commission website and create an account. In order to complete the registration process you will need; the last four digits of your Social Security number, an email address, an electronic copy of a government-issued photo ID, proof of address and a passport style photo. Before your application can be considered, you must pay a non-refundable $50. Once you have completed the registration form you must wait to see if your initial application has been approved. This stage of the process is very much luck based, with some people being notified that their application has been approved within as little as two days, whereas other people have been left waiting for up to 45 days.

Once you have heard back about your application and assuming that it has been approved, the next step is to book an appointment with a registered physician. The Maryland Medical Cannabis Commission provides a list of registered doctors on their website, as a letter from your regular doctor will not be accepted. At the physician appointment, the doctor will assess whether medical marijuana could have a positive impact on your health and will provide you with written certification if it is deemed appropriate. Physician appointments vary in price depending on who you see, but the average is around $200 within Maryland.

You must then send the physician’s letter to the Maryland Medical Cannabis Commission and they will issue you a patient ID number to show that you can legally purchase medical marijuana. As of April 2019, you must also pay a further $50 for a medical cannabis ID card, which you must have with you when purchasing marijuana. Before April, these cards were optional and you could instead purchase medical marijuana with any government issued ID and your patient number. This change was implemented to add an extra layer of authorization, preventing patient numbers being used by multiple people.

Once you have your card, you must visit a licensed dispensary within 120 days and use your card otherwise it will become invalid and the entire process will have to be completed again. Once you have used your card for the first time it is then valid for three years, after which it must be renewed. With a medical marijuana card, you are able to buy up to 30 days’ worth of marijuana at one time.

For minors within the state of Maryland, the process of applying is the same, but you must have a parent or legal guardian who is over 21 assigned as your caregiver. They are also required to be present at the time of purchase.

The 13th May 2019 saw a number of changes are approved by Governor Larry Hogan, involving medical marijuana in the state of Maryland. The biggest change for those with medical marijuana cards was the legalization of edibles. Medical dispensaries are now allowed to sell medical marijuana in edible form, meaning that as long as you have a medical ID card you can purchase brownies, gummies and all other forms of edible marijuana. It is likely that the effects of this change will take at least a few months to trickle down through the system and for edible products to be easily available in stores. This is a welcome change as it gives patients more choice and control over what works best for them and their lifestyle.

Another major change in the law means that for the first time research institutions within Maryland can purchase medical Marijuana, for research purposes. This is a positive step forward, allowing Maryland researchers to keep up-to-date with one of the fastest growing research areas in the country. This is predicted to have a major impact on Johns Hopkins University, one of the country’s leading research universities, which until earlier this month was not able to carry out its own research into the effects of medical marijuana.

New antitrust laws, which also passed on 13th May, have placed a limit on the number of medical marijuana dispensaries an individual can own, with four now being the limit. This is a move to prevent large corporations from taking over the market and allowing smaller companies a chance to flourish.

Since being introduced in 2017, the Maryland Medical Cannabis Commission has been flooded with applications and with the number of people applying continuously increasing they are struggling to keep up with the workload. Despite not having the means to keep up with demand, Maryland has added an extra layer to the process by requiring everyone to pay the $50 for a Medical ID card, something which is sure to only slow the process down further. Hopefully, over the next few years, Maryland will continue to refine the application process and applying for a card does not have to feel like a never-ending waiting game.

The legalization of edibles and research marijuana are both extremely welcome changes and show Maryland to be a state that is doing its best to move with the times and ensure that it does not fall behind other states. With the law becoming slightly more lenient, it has raised the question as to how long it will be before a discussion about legalizing recreational marijuana is back on the table. For now, though, the residents of Maryland are limited to medicinal marijuana.