The Downsides of Getting a Medical Marijuana Card? [Revealed] 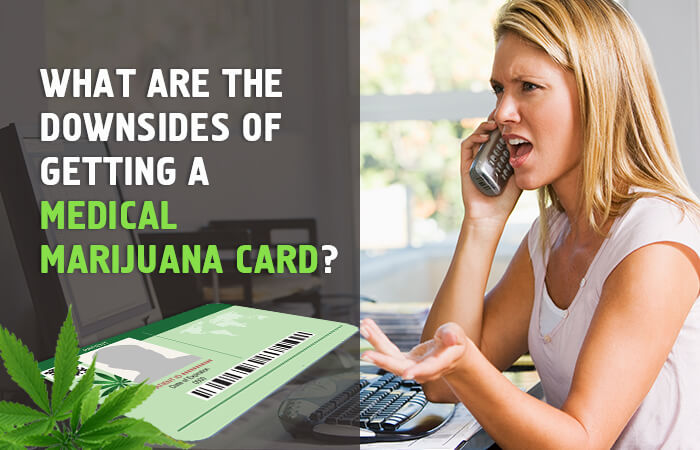 These days, consuming marijuana, whether for recreational or medicinal purposes, is becoming mainstream. States all across America are changing their legislature, and regular people are voting for cannabis reform. It is becoming increasingly more acceptable to smoke pot.

Several states are moving forward with marijuana legalization, and depending on the state, some dispensaries may require medical marijuana cards. The truth is, even in states where marijuana has been legalized, many consumers still buy their weed on the black market because they don’t want to go through the process of getting a medical marijuana card. A few states, like California for example, have a straightforward process to receive a medical marijuana card, while other states have a much more complicated procedure.

What is a medical marijuana card?

A medical marijuana card, also commonly referred to as a cannabis card or MMID, is an identification card issued to patients with qualifying medical conditions, giving them permission to enter medical dispensaries and buy marijuana to treat their health ailment or symptoms. In some cases, it also gives them permission to grow marijuana at home and use medical cannabis delivery services.

Medical marijuana is only legalized in some states, and these cards are issued per specific state and according to each state’s regulations. Patients are required to get a signed recommendation from their licensed physician to qualify for a medical marijuana card; the doctor and patient will need to agree that marijuana is a useful treatment option. Also, the patient’s medical condition must be an approved condition by the state.

There are many positive and negative things associated with getting a medical marijuana card. For the purpose of this article, we will be taking a look at the downside of getting an MMID.

The downside of the medical marijuana card

1. The process of actually getting your medical marijuana card

In many cases, to apply for your medical marijuana card, you will need to be examined by a physician and required to have a bona fide doctor/patient relationship. You need to have one of the qualifying medical conditions as per your state’s requirements, and your doctor will need to sign a form agreeing that you could benefit from the use of medical marijuana. Not all doctors are willing to do this, so just finding a doctor could be a challenge in some cases.

Some states actually require patients to access their full medical records to gain the approval of the state, while others simply allow you to Skype with a doctor for a quick “two-minute” appointment. So, it ultimately depends on what state you live in. If you are lucky enough to live in a state that conveniently enables you to get your recommendation online, then you shouldn’t really have anything to worry about. However, if not, then this process is often lengthy, tedious, and confusing.

2. You have to renew it every year

Most medical card providers issue recommendations that are valid for one year. So every year, patients must renew their cards for anywhere between $50 to $200. Although this might not be much of a downfall, it is most certainly annoying and costly. Also, if you happen to miss the renewal date, you will have to follow the application process again, from scratch.

In most cases, you will also be required to submit a signed form from your physician confirming that you still suffer from the stipulated medical condition which entitles you to medical marijuana. So again, this could be considered very much of a hassle.

Keep in mind that not renewing your medical marijuana card will leave you with the following problems:

While it’s true that employers cannot access your medical files to find out if you have received a doctor’s recommendation for medical marijuana, nothing is stopping them from conducting random drug tests. These can happen both pre-employment and also as part of the workplace policies and procedures.

It is highly likely that, if a pre-employment drug test is issued and marijuana is found in your system, you won’t be hired for the job. If these drug tests take place after the hiring process, the employer has the legal right to terminate you if weed is found within your system.

Also, although your medical marijuana card will not show up on a background check, there are other possible ways that your cannabis use could be detected. For example, if you decide to drive high and happen to be pulled over, a DUI will most likely be issued against your name. This would, of course, be compiled in a court record and would be accessible to the public.

If your employer knows that you have a medical marijuana card, the next move is entirely up to them, depending on where you reside. State laws regarding marijuana vary vastly, regarding everything from medical qualifications to use, to possession and registration. For instance, according to the law in California, employers have the right to terminate employees who use medical cannabis. However, in Michigan, employers are prohibited from discriminating against employees in possession of a medical card.

At the end of the day, it’s best to aim for some discretion when it comes to being in possession of a medical marijuana card.

4. You lose your second amendment right

If you have a medical marijuana card in one of the 16 states (plus the District of Columbia) that allow for it, the government might just have it in for you. It isn’t just that – the government isn’t keen on the idea of you obtaining your medicine legally and conveniently if that medicine is pot. The Bureau of Alcohol, Tobacco, Firearms, and Explosives (BATFE) also insists that you lose a key constitutional right just by letting your state know that you might want to take weed medicinally.

Just having a state medical marijuana card means that you fall into Sect. 922(g) of the federal criminal code, from the 1968 federal Gun Control Act. This law states that anyone who is an unlawful user of or addicted to a controlled substance is banned from having or receiving guns or ammo. This is based on the assertion that such possession implicates interstate commerce.

There is no exception in federal law for cannabis purportedly used for medicinal purposes, even if the use of marijuana is sanctioned by state law. Regardless of whether that particular state has legalized marijuana for medicinal purposes, any person who uses the substance is considered to be an unlawful user and is thus prohibited from possessing firearms or ammunition.

5. The government still has all the power

You will be the patient of a doctor who is under very strict scrutiny from the government. Should a doctor over-prescribe or approve medical marijuana for patients who don’t need it, or otherwise doesn’t take his or her role as a physician seriously, the government could expose his practice and perhaps strip him of his medical license. As a result, your card could possibly be rendered null and void.

At the end of the day, you should weigh up the pros and cons of getting a medical marijuana card. In many cases, the pros will more than likely outweigh the cons. However, it’s good to keep the above in mind when applying for your card. The last thing you would want is to go through this grueling process, only to find out the downside afterward.

Visit Site
Read Review
0 responses on “The Downsides of Getting a Medical Marijuana Card? [Revealed]”