What is The Age Limit of Medical Marijuana in California? 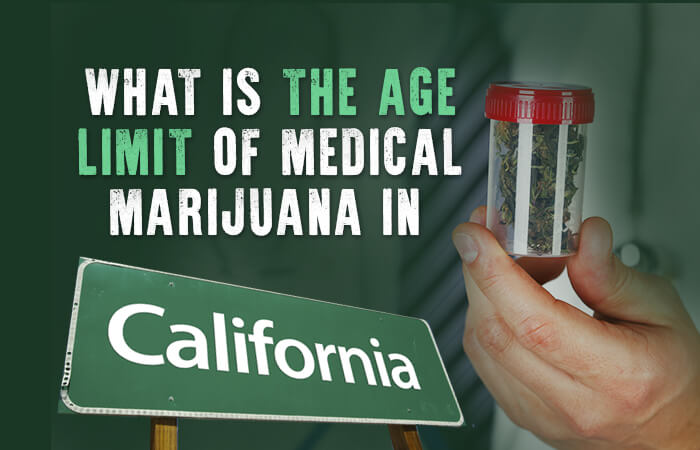 More than half of the 50 states in America have voted in favor of medical marijuana legalization and nine states have legalized marijuana for recreational use, one of these being California. But, while cannabis has been legalized in certain states, whether only for medicinal purposes or recreationally, this doesn’t mean that just anyone can get their hands on it.

For instance, in states where marijuana has only been legalized for medical use, you would need to suffer from one of the state’s qualifying medical conditions to qualify for the use of medical marijuana. One of the other restrictions is, of course, age.

For the most part, those in charge of rolling out the laws on recreational use in states like Colorado and California have deferred to experts and scientists. The fact that users should be 21-years of age or older to buy and use cannabis wasn’t decided at random. The age restriction in states where weed has been legalized for recreational use is associated with brain science and the fact that the brain actually continues to develop into the mid-20s.

What is Medical Marijuana in California?

Medical marijuana refers to the whole, unprocessed cannabis plant, or the chemicals contained within it, when it is used to alleviate the symptoms of certain diseases or conditions. The cannabis plant is composed of over 400 chemicals, known as cannabinoids, and each of these has a different effect on the body. The two main and most well-known cannabinoids are Tetrahydrocannabinol (THC) and Cannabidiol (CBD). THC is the psychoactive component, the element that makes users high, whereas CBD doesn’t have any psychoactive effect.

Medical marijuana typically has a higher CBD content, which means that when you consume it, you don’t experience the euphoric high that’s associated with recreational marijuana. It’s important to note that, while medical marijuana has been legalized in more than half of the United States, the FDA doesn’t approve or recognize the plant as medicine.

To get medical marijuana, you will need a written recommendation from a licensed physician is states where it is legal. You must suffer from a condition that qualifies for medical marijuana use in your specific state since each state has its own list of qualifying conditions. Also, keep in mind that not every doctor will be willing to recommend medical marijuana for their patients. Your state might also require that you get a medical marijuana card. This card will allow you to purchase medical cannabis at a store known as a dispensary.

What the California law states

In November 2016, California voted in favor of recreational marijuana legalization. 20 years after the golden state became the first to legalize medical marijuana, adults 21-years of age or older can now legally buy, possess, use, and even cultivate the cannabis plant in their own home. California residents and visitors who are at least 21-years old can buy up to an ounce of flowers or eight grams of marijuana concentrates per transaction. Those who register with the state as a medical marijuana patient can have as much weed as they want to at home.

But what does all this mean for those who are under the age of 21 in California? Is it possible for minors to qualify for a medical marijuana card?

Although the passage of the Adult Use of Marijuana Act (Prop 64) allows adults at least 21-years of age to use marijuana within the state’s borders, it’s still illegal for those in the 18-21 age group. These adults are only allowed to use medical marijuana, so they can’t consume weed for recreation. But, any resident who has reached the age of 18 years can apply for and receive a medical marijuana card.

If you’re between the ages of 18 and 21, then you’re allowed to buy cannabis from a medical marijuana retailer if you have a valid medical marijuana ID card. There are two types of licenses that dispensaries are required to possess in order to sell; Adult User-designated as license type A and Medical User-designated as license type M. A retailer can have both an A-type and M-type license since they’re required to apply for both in order to sell both. If they do have both of these licenses, they can sell to those between the ages of 18 and 21 years who are in possession of a marijuana card.

So is it legal for children under the age of 18-years to use medical marijuana in California? The short answer is yes. According to The Compassionate Use Act of 1996 (prop. 215), physicians can legally recommend medical marijuana for all qualifying patients, including minors. Furthermore, the MMP (Medical Marijuana Program) states that minors are covered by the Compassionate Use Act (CPA) and can legally obtain identity cards with the consent of their parents or guardian. However, there are a few things that a physician should consider before approving medical marijuana for a minor. These include:

The parents or guardian should be fully informed about the risks and benefits associated with medical cannabis and give their full consent for such treatment.
The minor should have a serious medical condition.

All conventional treatments should have already been tried unsuccessfully or considered rejected before they recommend the use of medical marijuana.

Ultimately, those patients 18-years of age or older can qualify for the use of medical marijuana. Minor’s (under the age of 18) are also able to qualify for medical marijuana under certain conditions. However, unless these patients have proof of emancipation, the county is required to contact their legal guardian, parent, or the person with legal authority to make medical decisions on their behalf. This is to verify the information on the application or renewal form. If the minor is lawfully emancipated or declared self-sufficiency status, they can apply for themselves as qualified patients.

If you are 18-years or older, you may be able to get a medical marijuana card for a minor (under the age of 18), if you are a caregiver for a child with a serious health condition. Caregivers must be 18-years or older and must be the primary caregiver for the patient. A primary caregiver is any person who consistently provides housing, health, or safety for a person who is in need of medical care or assistance. Often, caregivers need to take courses to qualify for this status.

What’s important to note is that, whether you want a medical marijuana ID card or not, you will first need to get a doctor’s recommendation. Keep in mind that not all physicians are believers in medical marijuana, which means that you might need to find another doctor or one who specializes in medical cannabis.

Once you receive your doctor’s recommendation, getting your ID card is quite simple. You will need to head down to your local health department and submit your application in person. You will be required to bring the following documentation:

You will also be required to pay an application fee – the cost will vary from county to county, so it’s best to check the fees of your local department. After submitting your application, your county will have 30 days to verify your application. After verification, they will have five days to provide you with your card.

Since the legal age for obtaining medical marijuana in California is 18, this is the process to follow for any patient who is 18-years of age or older.

Final Thoughts on the Age Limit of Medical Marijuana in California

Essentially, if you are 18-years of age or older in California, then you are eligible to qualify for a medical marijuana recommendation. However, this doesn’t mean that minors can’t use medical cannabis. The Compassionate Use Act of 1996 (prop. 215) legally allows physicians to recommend medical marijuana for all patients, including minors.

Keep in mind that there are qualifying medical conditions as per the state of California. To qualify for a medical marijuana card, your physician would need to confirm that you suffer from one of these conditions. Nevertheless, California is thought to be one of the most liberal states when it comes to the issue of cannabis. Thus, you shouldn’t have too much of a problem qualifying.

Visit Site
Read Review
0 responses on “What is The Age Limit of Medical Marijuana in California?”