What is the Difference Between Medical Cannabis and Marijuana? 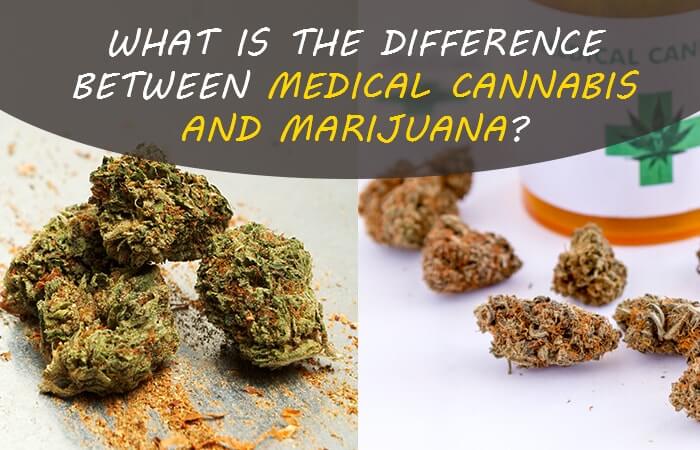 Medical cannabis and marijuana differ in many ways. For starters, there is their history, uses, and THC content. As the popularity of weed continues to grow, you are likely wondering about the differences between recreational and medicinal cannabis. Historically, marijuana was first used for its medical properties, but over time people started to use the substance recreationally.

In 2012, Washington and Colorado became the first states to legalize recreational marijuana. Prior to that, marijuana was legal in some states, but only to those who had qualifying medical conditions. As more states begin to follow in the footsteps of Washington and Colorado, “adult-use” or “recreational” marijuana have emerged as the commonly used terms for personal marijuana consumption that isn’t used exclusively for medicinal purposes.

In essence, there isn’t really any difference between medical cannabis and marijuana, since all marijuana (recreational and medicinal) come from plants that are naturally grown under the care of gardeners and are not manufactured in a lab. However, there is a significant difference between pharmaceutical products that have been derived from cannabis and the consumption of marijuana for the purpose of getting high.

Cannabis versus marijuana; it may seem like a silly comparison to make, given that the two terms essentially mean the same thing, but words have connotations that go beyond their specific definitions.

Cannabis has always been used as the scientific name of the plant, while marijuana has a Mexican-Spanish origin and first became commonly associated with the cannabis plant in the early twentieth century. Although the term has broadened in its range of vocabulary since then, it’s still a word that is closely associated with the illegal use of recreational cannabis and has poor connotations among certain members of the community.

Given the complex legal battle and social landscape that researchers, legislators, and medical practitioners are faced with, the use of cannabis as the preferred term has helped to keep the debate focused on the potential health benefits of the substance.

Using marijuana for enjoyment is still somewhat taboo in society, even though you don’t need to be suffering from a severe condition to find wellness benefits in casual use.

The laws that surround medical cannabis and marijuana are different all around the world. However, medical cannabis seems to be more legal and more socially accepted globally, while recreational marijuana is often illegal. Some countries and states view marijuana as a hard drug and have made it illegal even for medicinal purposes.

In America, marijuana is now legal in over half the nation for some reason or another. While some states have found that it is acceptable to use cannabis for medicinal purposes, others have taken it to the next level and now allow marijuana to be sold in retail dispensaries, similar to how beer is sold. This has been termed as recreational marijuana.

Most people have taken to the medical cannabis movement, because the plant can be used to help people who suffer from a broad range of health conditions like chronic pain, and even cancer. However, many draw the line at recreational marijuana. Whether they’re worried about it leading to unruly behavior or perhaps they just don’t realize that there isn’t a real difference between medical cannabis and marijuana, they aren’t happy with people using pot for fun.

The interesting thing is that, other than a difference in laws, the product is pretty much the same. We smoke it, eat it, rub it all over our bodies, or drink it – it’s marijuana, cannabis, pot, weed… We consume it pretty much the same way, whether we’re using it for aches and pains or getting an altered state of consciousness. There isn’t a special brand of weed that is set aside exclusively for people who have qualifying medical conditions. Essentially, we all get the same pot.

The real difference is that some medical patients are buying strains that are higher in CBD – the non-psychoactive compound of the cannabis plant that won’t get you high. CBD is notorious for its medicinal properties, and thus patients who are using cannabis for medical purposes usually purchase strains that contain high traces of CBD.

Here are some of the other key differences between medical cannabis and marijuana:

One of the key differences between medical cannabis and marijuana is the personal intent of using it. If you’re using marijuana for recreational purposes, then you likely don’t care what strain you end up with, or you will seek out strains with a high THC content. However, if you are using cannabis for medicinal purposes, you will want to know which strains are best for treating your specific symptoms or condition.

The tax rates on medical cannabis and recreational marijuana are different and are subject to the rules of each state. In some cases, tax rates can differ at county and city level.

Medical cannabis is typically listed as grown organically and under strict care. On the other hand, although you may get the same knowledge on how your marijuana was grown if you purchase it from a dispensary, there’s little chance that you will get this information if you buy your marijuana off the street.

After going through these differences, it may be clear to you that medical cannabis often has certain perks that aren’t available to recreational consumers. To summarise, these typically include the following:

Final thoughts on the difference between medical cannabis and marijuana

As laws continue to change, it’s important to know the difference between medical cannabis and marijuana. Medical cannabis is used for patients who have a prescription and is legal in many states. It often contains more CBD because this is the compound known to have the most therapeutic benefits.

Marijuana, on the other hand, is often used to get high and is in many cases illegal. It tends to contain higher traces of THC since this is the psychoactive compound that is responsible for the euphoric high that is associated with marijuana.

Visit Site
Read Review
0 responses on “What is the Difference Between Medical Cannabis and Marijuana?”