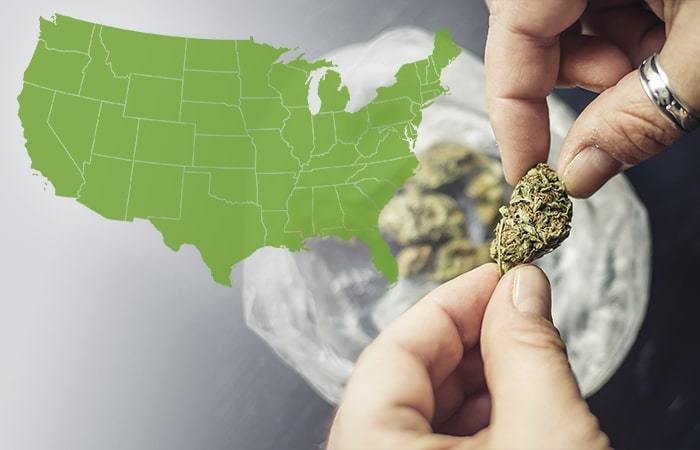 There are currently 33 states across America where medical marijuana is legal, and this number only looks set to grow. While it is great that an ever-increasing proportion of the American population is able to access what can be such a life-changing drug, the laws governing medical marijuana are currently regulated at the state level, and this means that every state has its own complex web of rules. This also means that just because you qualify for a medical card in your home state, it does not automatically mean that you can purchase and be found in possession of medical marijuana when visiting other states.

For anyone who has a medical marijuana card and replies on their daily dose in order to control serious health conditions, travelling to even the next state over can quickly become a mind game of rules and regulations which could have a serious impact on your health. Every state seems to have different rules, with some offering out-of-state residents the same rights as those who live within the state, whereas other states refuse entirely to acknowledge out-of-state patients at all. For example, the state of New York provides absolutely no information for out-of-state visitors and has seemingly closed their doors to anyone who is reliant on marijuana for medicinal purposes. There are also the 11 states where marijuana has been completely legalized, and you can travel worry-free.

Let’s take a look at the states that do recognize out-of-state patients and their different regulations.

Both medical and recreational marijuana is legal in the state of Alaska, meaning that you do not have to worry about whether or not your out-of-state medical card will not be recognized. The state laws which govern the use of marijuana apply to residents and visitors alike and allow you to purchase up to 1 ounce at a time.

Anyone travelling to the state of Arizona will have their medical MMJ card recognized; however, this will not allow for the purchase of marijuana from a state-licensed dispensary. What an out-of-state medical card will allow you to do is bring 2.5 ounces of marijuana into the state and to be in possession of it. While this middle ground might help some people, it will very much depend on how you plan to enter the state and whether you will be travelling through states that are not so lenient as to whether you can bring a supply with you.

Traveling to Arkansas with an out-of-state medical card will require a little research beforehand, just to double check that your medical card will be valid. While Arkansas does recognize out-of-state cards and allow for the purchasing of medical marijuana as though you are a resident, there is one catch: Your medical condition must be one that is recognized by the state of Arkansas. This means that if you suffer from a condition that is recognized within your home state but not under Arkansas law, your medical card is basically invalid and you could face prosecution if found in possession.

California is just one of the many states to have recently legalized the recreational use of marijuana and allows anyone over the age of 21 to purchase marijuana as long as they are in possession of a valid government photo ID. In line with state laws, visitors can purchase up to 1 ounce of marijuana at one time.

Colorado was the first state to legalize recreational marijuana, allowing out-of-state visitors to purchase marijuana from any licensed dispensary with just a valid photo ID card. There are a few restrictions that you might want to be aware of before heading to Colorado, for example, you can only purchase ¼ ounce at one time, and it is illegal to be found in possession of more than an ounce of marijuana.

The state of Hawaii has perhaps some of the clearest laws when it comes to out-of-state visitors and where they stand with regards to purchasing and possessing medical marijuana. In order for your medical card to be valid, you must apply online in advance for a visitor’s card; you can apply up to 60 days before travelling. This is a quick process which involves submitting your state medical card and paying a $49.50 fee. Once you have been approved, you will receive a visitor’s card, which is valid for 60 days and gives you the exact same rights as an in-state-resident. You can only apply for two cards per year, which should be absolutely fine for anyone travelling to Hawaii for vacation but might prove slightly more problematic for those travelling on a much more regular basis.

Back in 2016 Maine completely legalized marijuana, so whether you are planning on purchasing marijuana for recreational purposes or know that you will need to stock up for medical reasons while away from home, you are in luck. You can put your medical card away in Maine because all you need is a valid government issued ID and you are free to purchase up to 2.5 ounces of marijuana and enjoy at your leisure.

Massachusetts originally passed laws to legalize recreational marijuana back in 2013 and allows anyone who is over 21 and has a valid ID card to purchase up to 1 ounce of marijuana at any one time.

With marijuana being legal, regardless of your intended use, within the state of Michigan, you do not have to worry about your out-of-state medical card being recognized into order to purchase marijuana. The only restriction in place, which applies to both in and out-of-state residents is that you can only purchase 2.5 ounces at one time, but with such a high limit this should be more than enough to keep you going throughout your stay.

The state of Nevada has fully legalized marijuana, with plans to loosen laws even more in the future in order to draw in tourists. You can currently purchase marijuana as an out-of-state visitor even if you do not qualify for an MMJ card, and you are allowed to purchase 2.5 ounces every 14 days to enjoy as you wish.

Visitors in the state of New Hampshire are allowed to be in possession of up to 2 ounces of marijuana as long as they can provide a valid out-of-state medical card. Under current law, however, visitors do not have the same rights as state residents and cannot purchase from state dispensaries. So, if you are planning a trip to New Hampshire any time soon, make sure that you stock up on your required dosage beforehand because you will be limited by what you take into the state with you.

Oklahoma will allow out-of-state residents to purchase and use medical marijuana in just the same way that residents can; however, they must be in possession of a medical card from a state which has an equivalent program. Therefore, if you suffer from a condition that the state of Oklahoma does not recognize as requiring medical marijuana, you might find that your medical card is deemed invalid.

With marijuana being fully legalized within the state of Oregon, you do not have to worry about your out-of-state medical card being valid in order to be able to purchase marijuana. All that you need in order to purchase from a licensed dispensary is a valid form of ID and to be over the age of 21. Exactly how much you are allowed to be in possession of at one time is not quite as straightforward, however, with different limits existing depending on the type of marijuana you are in possession of. You are allowed to carry 16 ounces of edibles, 72 ounces of infused liquid, and 8 ounces of flower. There are also limits as to seeds and whole plants, but it is unlikely that you will have to worry about that as a visitor.

Under current law, out-of-state residents are not allowed to purchase or be found in possession of marijuana, even with a valid medical card from another state. There is, however, a loophole in the law, which allows parents or legal guardians of a child with a medical marijuana card to be in possession of marijuana purchased out of state, as long it is intended to be administered to said child. Unfortunately, it does look as though state regulators are set to change the law at some point in the next few years and close this loophole.

Rhode Island does recognize out-of-state medical cards, but just make sure that you bring all of the necessary paperwork with you when travelling; otherwise, you might find that your card is not accepted. In order to have your medical card recognized in Rhode Island, you must provide both your medical card and two forms of ID; your home state must also be one that tracks medical marijuana sales. Assuming that you have jumped through all of the hoops that Rhode Island has put in place for its guests, you will be allowed to purchase up to 2.5 ounces of marijuana every 15 days.

Washington was one of the first states to legalize marijuana fully, and as such an out-of-state medical card is not required to purchase marijuana while visiting. What you must have, however, is a valid form of identification – this can even be a foreign passport. You are able to purchase up to 1 ounce at a time, with there being different limits for liquids and edibles.

The District of Columbia is another one of those states where you might want to do a little advanced research before travelling just to double check that your medical card is valid. The current law will acknowledge out-of-state cards, but only if patients are from a state with a functionally equivalent medical marijuana program.

The current highly confusing state of US law with regards to medical marijuana adds an extra layer of complexity for anyone planning on travelling out of state, especially for those who rely on marijuana for medicinal purposes.

The good news is that, if you are travelling to one of the 11 states where recreational marijuana is legal, you do not have to worry about your medical card is valid and can simply enjoy the freedom and choice that tends to exist in such states.

The one thing that seems to be key regardless of where you are travelling is preparation, knowing the state laws and what your rights will be once you get there. After all, no one wants to run afoul of the state police while on vacation, especially for weed.

Travelling to Arkansas with an out-of-state medical card will require a little research beforehand, just to double check that your medical card will be valid. While Arkansas does recognize out-of-state cards and allow for the purchasing of medical marijuana as though you are a resident, there is one catch: Your medical condition must be one that is recognized by the state of Arkansas. This means that if you suffer from a condition that is recognized within your home state but not under Arkansas law, your medical card is basically invalid and you could face prosecution if found in possession.