Who Will Know If I Get a Medical Marijuana Card? 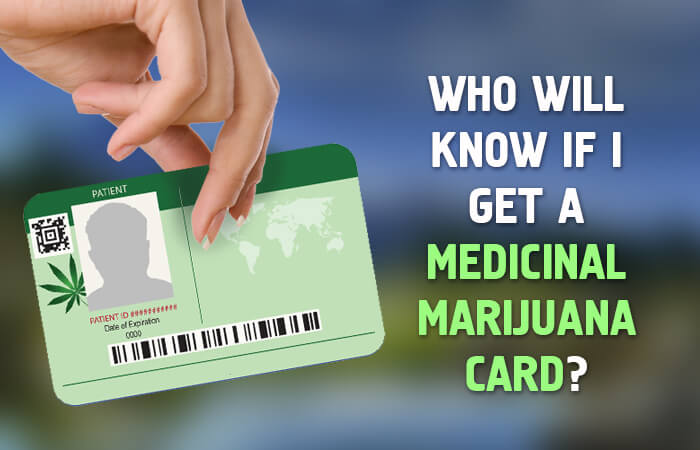 It has been a long and hard fight, but finally, millions of Americans in need of marijuana for medicinal purposes can get an MMJ card and use weed without fear of arrest. As of May 2018, at least 2.1 million people in 30 states possess a medical marijuana card, but there is a problem.

Even though the stigma surrounding cannabis is becoming less prevalent all the time, not everyone approves, and this could include your employer. Even in states such as California where marijuana is legal for recreational use, companies are allowed to fire employees for weed use off the job! In most states, firms are also permitted to reject a job application if an applicant tests positive for cannabis in a drug screening.

As a consequence, it is understandable for MMJ cardholders to be nervous about the mere mention of the term ‘background check’. There is a genuine fear amongst medical marijuana users that their choice of medicine will either get them fired or prevent them from landing their dream job. However, you can rest assured that knowledge of the fact you have an MMJ card is NOT in the public domain!

How HIPAA Laws Protect You

There is no danger of your MMJ card showing up on your background checks. Remember, you can only obtain the card with the consent of a licensed physician within your state. As a result, your medical information is protected under the Health Insurance Portability and Accountability Act (HIPAA). In other words, no institution is allowed to share the letter outlining your MMJ card eligibility, or any other medical information for that matter.

As you are doubtless aware, no one is allowed access to your health records and, as the weed you consume is for medical purposes, information about your MMJ card falls under this category. Although your state-issued card isn’t kept confidential under HIPAA, state officials still can’t access the information or provide it to any employer.

Therefore, when an employer – past, present or future – runs a background check on you, there is no legal way for them to access this information. Incidentally, landlords and bank lenders also have no way of knowing you have an MMJ card unless you tell them! If you use your company’s physician and details of your MMJ card are included with your medical file, he/she can’t share this information with the organization.

If you want to know how strict HIPAA laws are, here is what happened to healthcare professionals who violated the law:

What About Drug Screening?

Unfortunately, MMJ cardholders have no such protection against company drug testing policy in many states. For instance, in 2008, the California Supreme Court ruled that employers are legally allowed to fire employees who use medical marijuana. This is the case even if you use it off-duty or on vacation. The ruling still stands today, which is remarkable since weed is now legal for recreational use in the Golden State.

There are different rules, depending on the state you live in, with some offering far better protection than others. For instance, Michigan users are aided by the Department of Community Health, which is in charge of the state weed program. The Department forbids employers from discriminating against an individual because they have an MMJ card.

It is a similar story in Rhode Island thanks to the ruling of the Callaghan v. Darlington Fabrics Corp et al. case, which concluded on May 23, 2017. In this case, the plaintiff applied for a paid internship with Darlington and was honest enough to tell her prospective employer that she had a medical marijuana card and would not pass the pre-employment drug test. According to company policy, employees were not allowed to use marijuana on company property.

When the plaintiff was not hired, she sued Darlington under the state’s medical marijuana law because the firm did not have a rule which stated it would withdraw a job offer upon the receipt of a positive drug test. The court sided with the plaintiff in what could prove to be a landmark case for MMJ card users in Rhode Island.

Discretion is the Better Part of Employment

Although your employer has no right to access your medical records and find out about your MMJ card, it doesn’t mean you are bulletproof. A prime example of foolish behavior is to use a marijuana dispensary near your workplace. If a colleague sees you exiting or entering the building, it eliminates your privacy. Also, don’t use social media sites to portray your use or love of cannabis, because an increasing number of organizations monitor the social media usage of their employees.

Let’s say you live in California or Colorado – two states where weed is legal for recreational use. It is a sad fact that you can be fired for using marijuana during your time away from work. If an employer finds out about your need for weed, there’s a strong possibility that you’ll have to submit to a ‘random’ drug test. If you fail this test, your firm could have the right to terminate your contract unless you live in a state such as Michigan or Rhode Island. Remember, marijuana is still federally illegal, so you will probably have no case even if you have a legal prescription.

If in doubt, why not perform a background check on yourself? There is a myriad of well-known sites for this purpose, so find one and fill in your information. All you need is your Social Security Number and name, and you will gain access to the same information as your boss, landlord or bank lender.

When it comes to keeping your MMJ card secret, the onus is on you, because HIPAA protects you from prying eyes. As a result, all you have to do is keep your marijuana use to yourself. This means no discussing private medical matters at work or during social occasions. Make sure you pick a dispensary as far away from your workplace as reasonably possible, and don’t share private information on social media – your bosses could be watching.

Visit Site
Read Review
0 responses on “Who Will Know If I Get a Medical Marijuana Card?”