Medical Card Marijuana vs. Bearing Arms [Can You Have Both?] 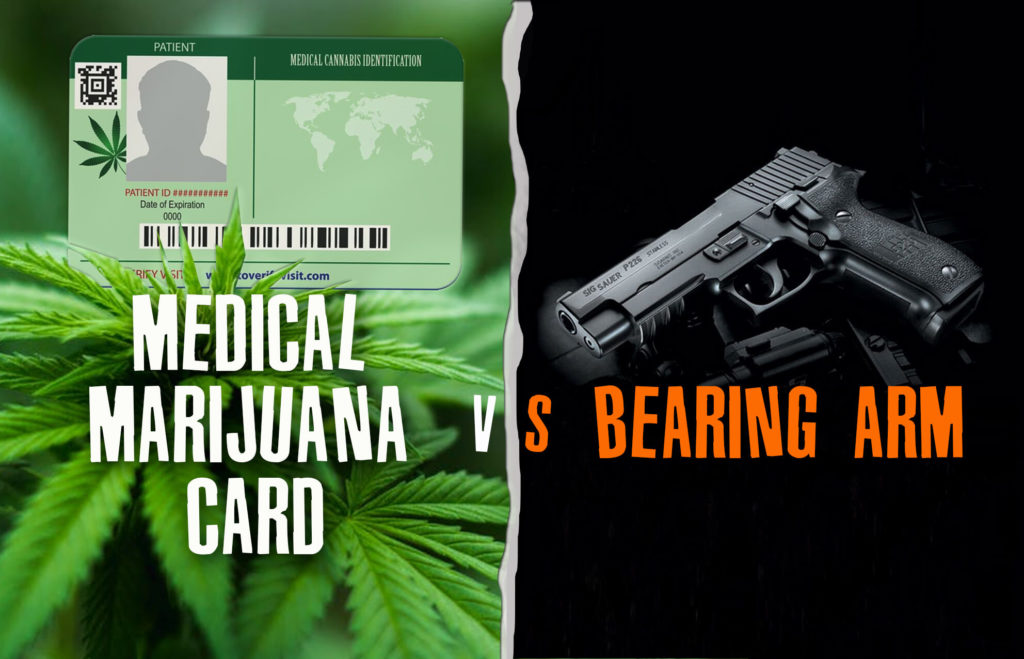 An American citizen’s Second Amendment right to bear arms has been the subject of controversy for decades. After the countless mass shootings that seemingly occur daily in the United States, it is arguably the burning issue in the nation. At least it would be if the likes of the NRA ever allowed a debate! The entire marijuana debate is also taking up a lot of space in the news, and these two issues are inextricably linked.

Non-U.S. citizens may be shocked to learn that under the current American legal system, you are not allowed to have a Medical Marijuana (MMJ) Card and own a gun. Yes, you read that correctly. If you successfully apply for an MMJ card, you can’t purchase a firearm. It is a bizarre situation that isn’t helped by the continued confusion surrounding this particular form of legislation.

When Did This Craziness Start?

You have to go back to the Gun Control Act of 1968 to discover the beginning of the existing legal maze. The National Firearms Act (NFA) had been passed in 1934 to try and curb the increase in gang violence. It taxed the sale and manufacture of guns. However, a case called Haynes vs. the United States 1968 rendered the NFA invalid, so the aforementioned act was introduced.

Among other things, the new act made it illegal for felons, fugitives, minors, drug addicts, and the mentally ill to own guns. In reality, however, it wasn’t just ‘addicts’ who lost their right to bear arms. Users of cannabis and other illegal drugs also lost their gun ownership rights. Incidentally, while President Obama placed restrictions on the ability of mentally ill people to purchase these deadly weapons, the Republican-controlled House overturned the legislation in February 2017. Yet cannabis users are still left in the dark, go figure!

As with most things cannabis, this injustice was allowed to fester unchecked for decades. That is until a Nevada resident named Rowan Wilson challenged the courts and opened up an entirely new debate. In October 2011, Wilson attempted to purchase a firearm for self-defense from a gun store in the state of Nevada but her request was refused. The reason? Wilson possessed an MMJ license which meant the store was forbidden from selling her a weapon because she was classified as an ‘unlawful drug user.’

While this situation doubtless happened thousands of times before, Wilson decided to make a stand. She filed a lawsuit which challenged the federal statute against ownership of guns by lawful marijuana users. It was a case that ran for years until August 31, 2016, when the Ninth U.S. Circuit Court of Appeals ruled that the government ban on selling firearms to marijuana users was NOT in violation of Second Amendment rights.

In this particular case, the court first looked at whether the stated objective of the government is significant, substantial, or important. Then it decided that there was a reasonable connection been the regulation being challenged and its supposed objective. The purpose of the legislation is to prevent gun violence in the interest of public safety. While this is a noble goal, it doesn’t quite fit with the rest of the nation’s gun laws.

The ease with which people can purchase weapons and the ability for one person to assemble enough guns to form a militia are far bigger issues, yet neither is being tackled. In the United States today, it is okay to purchase an assault rifle and build up an arsenal capable of killing dozens of people in seconds. However, it isn’t okay to own a single gun if you happen to take marijuana to help with your glaucoma. You can even get a gun if you’re on the no-fly list!

The recent decision by the Ninth Circuit Court is even more galling since it is based in California, a state known for its relaxed attitude to marijuana; it recently made it legal to purchase weed for recreational use. If a court in the most liberal state in the country can’t see sense, there is little hope for MMJ card owners who want to protect themselves with a gun.

The chairman of the group Marijuana Majority, Tom Angell, was outraged at the decision. After the announcement, he pointed out that there was no evidence of marijuana causing people to become more violent. If anything, the opposite is the case. The ridiculousness of this state of affairs can’t be overemphasized. In states where weed is only legal for medicinal use, citizens have to choose between treating their medical condition and purchasing a firearm to keep them safe.

What About States Where Weed Is Legal For Recreational Use?

Technically, it should also be impossible to buy a gun if you’re a cannabis user but this is not the case. Gun shops have no means of tracking recreational marijuana users so unless you admit that you like a smoke or enter the shop as high as a kite, there is nothing to stop you from buying a gun in any of the eight states where it is legal to smoke weed recreationally.

Then there is the small matter of background checks which vary depending on the state you live in. In states such as Georgia, you can easily buy a gun regardless of whether you have an MMJ card or not. While licensed firearm dealers must conduct a background check on all potential customers, unlicensed sellers at places such as gun shows, have no such red tape to negotiate. According to research taken from the Annals of Internal Medicine, a whopping 22% of guns are sold by unlicensed sellers.

Residents of states such as Wyoming, Colorado, Delaware, and Pennsylvania cannot exploit the loophole because sellers must perform a background check at the point of sale. Iowa, Massachusetts and six other states are even stricter; they require a background check and a permit for private buyers.

After the Ninth Circuit Court ruling, the Bureau of Alcohol, Tobacco, and Firearms (ATF) added a new warning to Form 4473, the Firearms Transaction Record form. It is now considered perjury if you lie and say you are not an unlawful user or have an addiction to marijuana or other controlled substances.

It is an absolutely ridiculous situation where you can purchase guns by the dozen with little or no problems but if you try to purchase one handgun while in possession of an MMJ card, you are barred by the federal government. Proponents of the law say that guns and drugs don’t mix and while you can’t disagree with that statement, the many nuances of this special circumstance are not being taken into account.

When was the last time you saw someone high on marijuana who was aggressive? You are allowed to own as many guns as you like if you pass a background check and happen to be a chronic alcoholic. Who do you think is more capable of violence: A drunk or a stoner? If you say the latter, it’s clear that you’ve never been stoned!

Visit Site
Read Review
0 responses on “Medical Card Marijuana vs. Bearing Arms [Can You Have Both?]”