Weed Card: What is It and What Does It Help You Get? 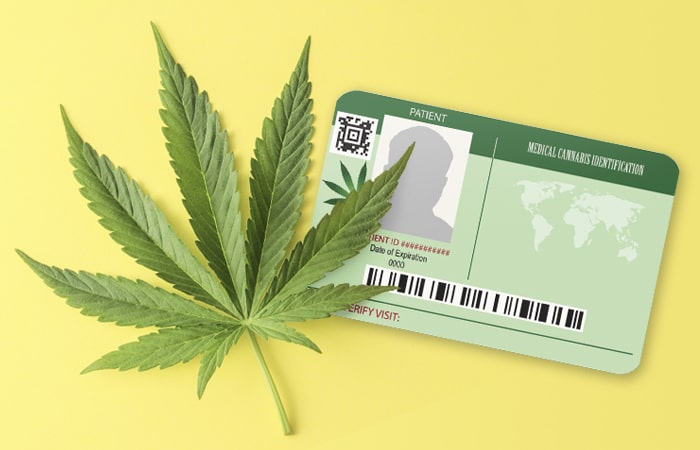 Even with all of the different states in the USA that have legalized marijuana so far, there are still thirty-three states that only allow hopeful marijuana users access to their herb of choice if they have a valid medical reason.

The tricky part is trying to figure out what exactly constitutes a valid medical reason, and also what you are supposed to do actually to get your marijuana.

Well, the states in the USA that have legalized medical marijuana have come up with one method of being able to allow their citizens access to marijuana, in the form of a single, handy card: The weed card.

But what exactly is the weed card, and what does it actually help you get?

What is a Medical Marijuana Card?

A medical marijuana card, also known as a weed card, is the method whereby thirty-three medical states try and control who is allowed access to medical marijuana. Its exact appearance differs between states, as well as what material it is made from, but it is provided in precisely the same way.

To start with, you need to have a qualifying condition that your state considers a valid enough reason to be given a medical marijuana card. Then, you need to visit a doctor and be prescribed the card, assuming that everything checks out.

For example, many states consider epilepsy to be a valid reason for a medical marijuana card – in fact, it is now federally legal to get a roughly 1:1 ratio of THC and CBD extract to treat epilepsy, regardless of your actual state laws – but they don’t consider pain and inflammation to be a significant enough condition to warrant a medical marijuana card. Other states, however, take the opposite approach, only offering CBD for epilepsy, yet still allowing high THC strains for the purpose of treating painful and inflammatory conditions.

This is what makes it so intensely difficult to work out whether or not you can actually get a medical marijuana card, as it seems like every state, and sometimes even every doctor, doesn’t want to actually give it to you.

The reason why a medical marijuana card exists is twofold. For starters, it is an excellent way for a state government that is still unsure of marijuana and its benefits to still allow those that desperately need marijuana to get it. In a way, many medical marijuana states exist so as to appease their voters that are desperately trying to get marijuana fully legalized – if it is at least medically legal, then it is a step in the right direction for complete legalization.

The second primary reason why medical marijuana cards exist is that they are an excellent way to keep track of the amount of marijuana being consumed by a state’s citizens. The government not only wants to make sure that only a certain percentage of their population uses it, but the data on how many people use marijuana is incredibly valuable for a government that is trying to consider whether or not to legalize marijuana fully.

If enough people are using marijuana, then it might make sense to pass a popular marijuana legalization bill – after all, governments are only trying to get reelected next election season, so if they can pass a popular bill that will have plenty of support, why not do it?

The problem, once again, comes about because of the massive differences between different states about whether or not you qualify for a medical marijuana card.

So, how are you supposed to figure it out?

How You Know If You Qualify for a Medical Marijuana Card

Actually trying to figure out for yourself what conditions accurately qualify you for a medical marijuana card can feel almost impossible in different US states, as it can seem like all the information you need is hidden from easy access.

Instead of being obviously apparent in a doctor’s office, you need to access your individual state’s governmental health organization and check what conditions are considered as being valid for a medical marijuana card. This can vary wildly between different states, with some considering even the most banal and uninteresting conditions, such as the pain and inflammation we already mentioned, but also the generally vague “headaches and irritations” of the California state government. However, many of the thirty-three states are actually insanely strict, only allowing those with the most damaging and debilitating illnesses access to marijuana.

One type of disease that is almost always considered to be valid regardless of the state are those conditions that cause neurodegenerative symptoms or in any way slowly damage your ability to function. Great examples of these awful diseases are things like Parkinson’s disease, or even Alzheimer’s.

To actually be able to prove that you have a qualifying condition to entitle you to medical marijuana, you need to provide some kind of usable evidence. Once again, different states require different documentation, but by far the best thing to bring to your doctor is the fact that your doctor already knows about your conditions – this means trying to get a medical marijuana card from your regular physician.

This can sometimes be difficult, especially if you have a somewhat stereotypical, family-focused doctor that might not understand the usefulness of marijuana.

In these cases, you need to try and book yourself an appointment at a doctor’s surgery that you don’t normally go to, in the hope that they will be more understanding of the importance of being able to access medical marijuana.

In some states, such as California and Colorado before they legalized marijuana properly, there exists a multitude of doctor’s clinics whose entire purpose is to allow you to get a medical marijuana card. These can sometimes feel a little bit sketchy, but it isn’t in any way criminal – they are just a legal loophole around the rather confusing situation of medical marijuana.

Once you do actually get your medical marijuana card, what are you actually able to get with it? How does it actually help you?

What Does a Medical Marijuana Card Help You Get?

The primary differences between medical marijuana and regular marijuana are mostly one of the names and intended use. Fundamentally speaking, marijuana is the same thing as medical marijuana, except that the individual strains are bred for the purpose of being used as a treatment.

For example, one common reason to breed a different marijuana strain for the purpose of medicinal use is to ensure that it has a higher concentration of CBD than other strains. Many popular marijuana strains are well known for their potent THC content, but the higher the THC content gets in a particular strain, the lower the CBD content must be, as the plant only has so much room for cannabinoids.

To help improve the marijuana’s ability to help treat all manner of different conditions, breeders work to make sure that their marijuana has a more even balance of CBD and THC, or even that it has almost no THC and is entirely filled with CBD, as is the case with strains such as Charlotte’s Web.

However, there is still plenty of medical marijuana that is pretty much the same as regular marijuana – although some states do mandate what strains and what THC content can be considered legal for sale as a medicinal marijuana strain, the majority of the states that allow medicinal marijuana also will enable you to get whatever strain you want.

This means that, with a medical marijuana card, you can walk into your local dispensary and obtain whatever marijuana you like, regardless of its medicinal effects.

This is the reason why so many people are desperately trying to get a medical marijuana card; even though they are incredibly helpful for ensuring people have access to medicine that can be of great benefit to them, it is still the most reliable and simple way of obtaining marijuana intended for recreational use.

Although many people might object to this, considering the only other option is buying marijuana illegally from street dealers, and considering that obtaining a medical marijuana license means that the state gets to benefit from the taxes of the sale of that marijuana, it is essentially a win-win scenario.

As long as you can get hold of a medical marijuana card, you are essentially able to get access to whatever kind of marijuana you want, of whatever intensity you want.

Make sure you don’t abuse it!

Final Thoughts on Weed Cards and What They Get You

A weed card is, by its very name, given some kind of strange and dangerous reputation, as if by owning one you are committing some kind of crime against the state.

In actuality, a weed card is nothing more than the legal permission by the state to allow you to utilize marijuana for medical purposes, to help you treat or deal with all kinds of different, sometimes extremely serious, medical conditions.

Although there are plenty of people that use a medical marijuana card to obtain weed more easily, without really needing it to treat a medical condition, it is still an incredibly beneficial tool able to help treat millions of people.

Although many states like to make it seem like they are difficult or dangerous to get, as long you go to your doctor with evidence, a positive attitude and plenty of prepared research, you shouldn’t have any kind of trouble getting your own medical marijuana card and being able to get your own beneficial marijuana.

Who knows; maybe eventually we won’t need it? However, before complete federal legalization occurs, we need medical marijuana in as many states as possible, and as many people using it as possible.

So, in a way, by getting a medical marijuana card, you are contributing to marijuana for all. Good job!

Visit Site
Read Review
0 responses on “Weed Card: What is It and What Does It Help You Get?”