Can a Teen get Medical Marijuana for IBS? 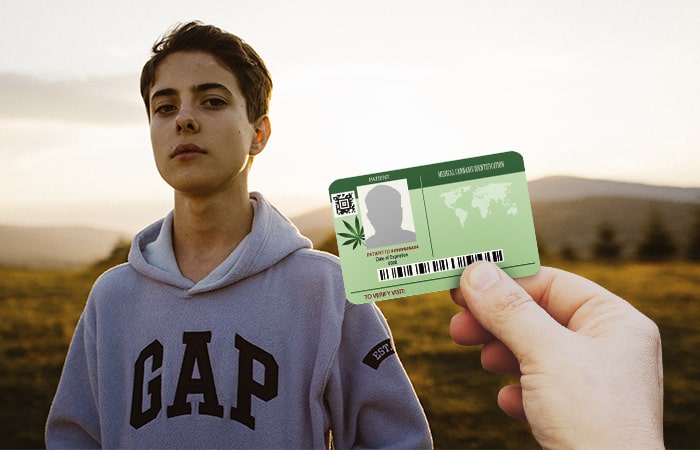 There are few conditions more perplexing and difficult to treat than Irritable Bowel Syndrome, also known as IBS. With a wide range of different symptoms and issues that can arise from the disease, it can be extremely difficult to try and find any kind of treatment options.

This is made even worse if you are a teenager, as you don’t really have any method of finding treatment methods that don’t involve your parents or using conventional medication, which often struggles to work.

Medical Marijuana has been shown to help treat IBS, at least in helping suppress the unpleasant symptoms, but it can be very difficult to try and get a medical marijuana card for treating IBS, especially as a teenager.

Just how does a teenager get Medical Marijuana for IBS?

What is IBS & How Does Medical Marijuana Help Treat It?

IBS is often a disease that is difficult to properly classify, as it is actually a summation of different problems within the bowels that causes irritation, inflammation, and general gastrointestinal stress.

The primary symptoms of IBS tend to be things like frequent stomach cramps, diarrhea, and constipation that often occurs interchangeably. These unpleasant symptoms can last for days, weeks or months at a time and can sometimes happen without warning.

In the majority of cases, however, IBS typically has a trigger food that is sometimes unique to the individual. For some people, any kind of spicy foods triggers their IBS, whereas for others it might be any sort of dairy product.

This unpredictable nature of the disease is what causes so many problems, as it is almost impossible to actually find a continuous treatment, other than in trying to help suppress the symptoms. The cause of IBS is essentially unknown, as it is rather like diabetes in that, once you get it, you have it for life.

The use of Medical Marijuana to try and treat IBS has been known about for some time but is only recently becoming officially accepted as a legitimate reason to obtain medical marijuana legally.

Many studies, such as this one by Waseem Ahmed and Seymour Katz for the Independent Peer-Reviewed Journal of Gastroenterology & Hepatology, have noticed that the use of marijuana is useful in helping treat the symptoms associated with IBS.

The principle reason why Medical Marijuana is useful in treating IBS is due to the anti-inflammatory properties of cannabinoids, particularly the lesser known cannabinoid known as CBD that is found in varying concentrations in cannabis.

Once imbibed, cannabinoids interact with the endocannabinoid system, the health system within the human body that controls a vast number of different bodily functions. Once there, it works with the CB1 and CB2 receptors to suppress the inflammation response in the body, allowing sufferers of such as conditions as IBS and even arthritis to enjoy a reduction in their unpleasant symptoms.

Additionally, medical marijuana is able to help suppress the pain sensation in the body, allowing an IBS sufferer to not be in constant pain during their flare-ups.

How Do You Get Medical Marijuana for Your Anxiety as a Teen?

The main issue with getting medical marijuana, regardless of the condition or illness that you are trying to treat, is the disparity between state and federal laws regarding marijuana.

The problem is that marijuana is, strictly speaking, still an illegal substance, at least on a federal level. Though some marijuana medications have been federally legalized only recently in 2018, the fact remains that you are technically breaking federal law.

However, individual states have legalized marijuana for the purposes of either recreational or medicinal use, depending on the state. This means that, if you live in a state that has allowed at least some kind of medicinal marijuana (which is actually thirty-three different states!) then you can get medical marijuana regardless of your age.

The next problem you come into is that, as a teenager, you do not have medicinal rights over your own body. Though the exact age depends on what state you live in, you will likely need your parents’ permission to be able to get any kind of medicinal treatment, no matter how legal or illegal it is.

This means that, even if you are able to treat your IBS with medical marijuana, you might find yourself unable to due to the fact that your parents disagree with it.

Of the thirty-three states that allow medical marijuana, there are a few that would enable doctors to prescribe marijuana without explicit parental consent, but you will need the permission of some kind of legal guardian in the vast majority of states. This puts the burden of trying to convince both your doctor and even possibly your parental guardians squarely on you; it is up to you to convince your parents that you need medical marijuana.

Of course, assuming you manage to convince your parental guardians, you still need a few other things to be able to get medical marijuana from a doctor.

To begin with, you will need some form of ID, as well as a documented list of your history of medical treatment regarding your disease. This is usually pretty easy, but it can sometimes be helpful to actually obtain physical copies of these records, so as to use them as evidence when speaking to your guardians or your doctor. It also isn’t a bad idea to print out the abstracts of a few different supportive studies that detail the medicinal uses of medical marijuana, especially when it comes to IBS.

If you have managed to convince your parents of the medical significance of Medical Marijuana to treat IBS, you might think that it is all plain sailing from there; you’ve got the permission, what else do you need?

Once you actually get the permission from those in charge, you then need to decide what kind of strain you want.

What Kind of Medical Marijuana Strains Do You Want for IBS?

When it comes to treating IBS, the main thing you are looking for is its CBD content. Most marijuana strains that are sold commercially, especially in states with recreationally legal marijuana, contain a much larger quantity of THC than they do CBD. This is because it is the THC that gets people high and allows them to enjoy themselves.

There are many strains that are higher in CBD than they are THC, so this is what you need to look for; any strain that is listed as “medicinal,” as well as ones that do not totally get rid of THC. As a sufferer of IBS, you likely want at least a few percentage points of THC, so as to help treat the pain that often arises from IBS.

However, as long as you get a high-CBD strain, you are most likely going to be okay. The only other thing you need to consider is whether or not you are okay with the potential risks.

Wait, there are risks with using medical marijuana as a teen?

Are There Any Risks for Teens Using Medical Marijuana for IBS?

Despite the popularity of claiming that marijuana has no side effects whatsoever, there are in fact a multitude of problems with using marijuana as a teenager that many do not know about.

You not only need to consider the regular side effects of whatever strain of medical marijuana you are using, but you also need to bear in mind that marijuana use among teenagers is not exactly proven safe.

Teenagers are called what they are because they are not yet fully developed as adults, either physically or mentally. In fact, your brain does not stop developing until you are around 21 years old. This means that, up until the age of 21, anything you take that could have an effect on the development of your brain might cause you problems.

There are multiple studies, such as this one by Joanna Jacobus and Susan F. Tapert that have found that the developmental rate of teenagers who use marijuana frequently to be noticeably lower than those who don’t.

As ever, there are some fundamental problems with studies like these, especially ones that focus on teenagers – it is almost impossible to rule out what the teenagers have been taking in conjunction with marijuana. It is possible that this developmental brain reduction might have been caused by excess alcohol usage alongside marijuana.

The most problematic thing is that, ultimately, we don’t know. We still don’t know the complete extent of how the teenage brain reacts to marijuana, especially when it comes to long term development.

However, the adverse side effects associated with marijuana and brain development have typically only been recorded when the user was imbibing an extremely large quantity of THC over a long period. As an IBS sufferer, you are likely not using a huge amount of marijuana every day; additionally, your marijuana will be rich in CBD rather than THC, making it not as dangerous as other strains.

Final Thoughts on Can Teens Get Medical Marijuana for IBS?

Irritable Bowel Syndrome is an incredibly unpleasant, aggressive disease that leaves people in a near-constant state of pain and distress.

For those that suffer from it, it can feel like there is absolutely nothing you can do to treat the symptoms other than conventional, over-the-counter medication.

However, thanks to recent studies and scientific efforts, we now know that medical marijuana can be incredibly useful at helping treat the symptoms of IBS. Nowhere is this more important than with teens, who often have no recourse with regard to treating their diseases as they are often misdiagnosed or misunderstood due to parental intervention.

Thankfully, it is surprisingly easy for a teen to get medical marijuana as long as they speak to an understanding doctor and live in a state with legalized MMJ.

Though it might seem daunting, teens can easily access medical marijuana to treat their IBS, as long as they have the wherewithal to convince those around them.

Visit Site
Read Review
0 responses on “Can a Teen get Medical Marijuana for IBS?”